On Friday 31st January at 1800hrs ten of us left Edinburgh heading for Mid Argyll in the face of an apocalyptic weather forecast. Our plan was to spend the weekend removing gorse on the Scottish Natural Heritage (SNH) reserve of Taynish. We had an uneventful journey to Balloch where we paused for some scran at the chippie. Suitably refreshed we then began the 'interesting' part of the journey making for the Rest and Be Thankful where - despite signs warning of increased landslip risk and some roadside snow - we reached our journey's topographical high point. We soon arrived at Kilmartin and its wonderfully misnamed Bothy.

And the weather? Well, Saturday dawned with a notable lack of overnight rain: unfortunately it had snowed instead. And that wasn't all. Breakfast was accompanied not by the rumble of stomachs but of thunder. Our "interesting" commute to Taynish via Knapdale (site of the soon-to-be-completed beaver reintroduction trial) was through a winter wonderland. We were met on site by SNH Ranger Gordon, who explained that our task was to improve the habitat of the rare marsh fritillary butterfly.

Suitably kitted out we began to cut and burn the gorse in an area new to LCV. The cutting initially considerably outpaced the burning until heavy duty firelighters were deployed. We continued in mainly dry conditions, the cooler winter temperatures keeping the local frog population at bay so no amphibian rescue missions were required as on our previous visits to the reserve. Play for the day was halted around 1630 and we retired to Kilmartin where Sarah provided us with a splendid dinner. 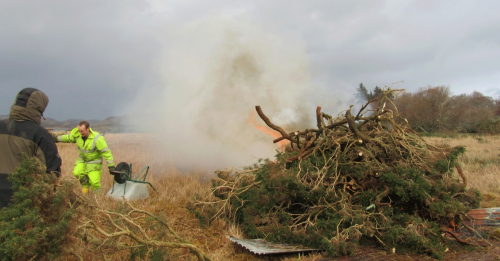 After a sound night's sleep Sunday dawned showery and so began round two. Today we were accompanied by the new reserve manager Alan, his predecessor John Halliday having moved on. The day's work had two fronts, both aiming seaward to Loch Sween in the east and Linne Mhuirich in the west on opposite sides of the narrow Taynish peninsula. 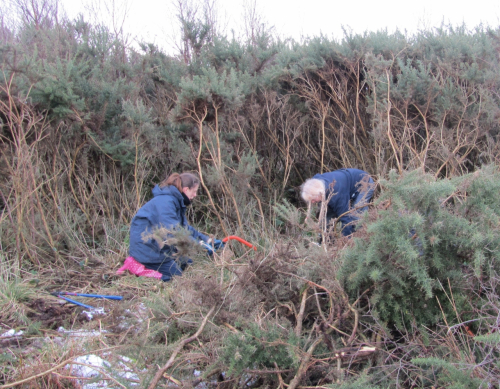 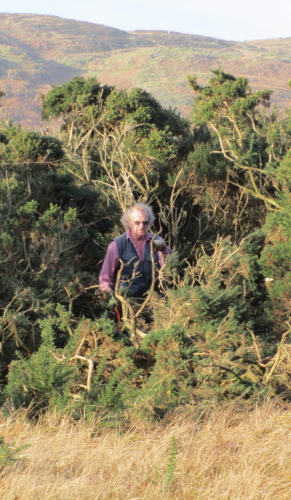 We were happily surprised to discover Saturday's fire embers still aglow which came in useful for igniting our new bonfire. The wind remained low despite the earlier assertions of the forecasters so our firelighting skills were tested again. Cutting continued and by the day's end we had removed an impressive mountain of gorse for future workers to burn. 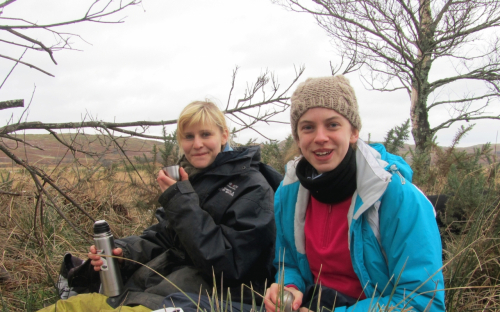 We hit the road back east to Edinburgh accompanied by radio commentary that Scotland's 2014 Six Nations campaign had begun with a defeat in Dublin. Travelling up Loch Fyne to Inveraray we could see the countryside which had been shrouded in darkness two days previously and after refuelling at the chippie we continued to Edinburgh via Glasgow. Thanks to Louisa for leading and to Sarah for driving and catering. [And thanks also to Willie for driving all of the 'interesting' sections and for providing his splendid bluegrass CD which, curiously, he has failed to mention..Ed.]