How does the ripple effect theory go? A distant butterfly flaps its wings causing slight atmospheric changes, and a hurricane results some weeks later. Well at Taynish on the weekend of 10-11 March, LCV contributed to a real-life butterfly effect. The butterfly in question is the rare marsh fritillary. It lives in damp open grassland. The caterpillars mainly feed on devil's bit scabious and are declining in every European country. Western Scotland, in particular Argyll, is one of the species' remaining strongholds. So the following band of Conservation Brothers and Sisters set about making a little bit of the Taynish National Nature Reserve, which is managed by Scottish Natural Heritage (SNH), more suited to this rare butterfly. 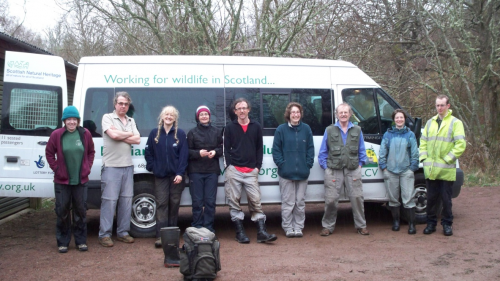 We were met by John Halliday of SNH early on Saturday morning after our minibus traversed the minefield of potholes on the single track road into the heart of the reserve. Our mission was to cut back and burn large areas of gorse to create more open grassland next to the sea inlets. It is a beautiful location with part of the Isle of Jura visible a few miles across the sea.

We began by dragging sheets of corrugated iron to a fire site in already-cleared gorse. After getting the fire going it was a simple - but exhausting - task of cutting and dragging gorse to it. The spiny leaves and dry branches of the gorse were quickly consumed by the fire and a satisfying 'whoosh' was emitted when a particularly large or dry load was thrown on. 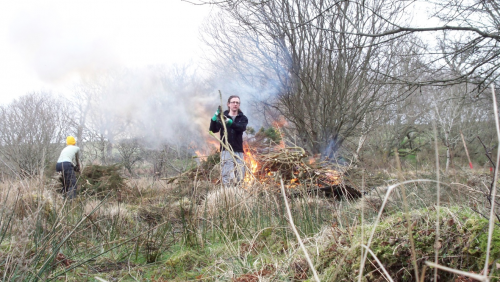 Mr. Willie McSporran feeding the fire: 'I like this one - should we save it?'

We were blessed with mostly dry skies and a warmish breeze. This did create the risk of the fire spreading to the grass. Constant tending of the fire by two volunteers to keep it on the metal sheeting and to extinguish any spread averted any problems. Frogs did appear to be attracted to the fire and I twice had to chase one away. At close of play at about 4.30pm on the first day we carried water from the sea to extinguish the fire and spread the ashes out as there was a small risk of a passer-by stumbling onto the fire site. 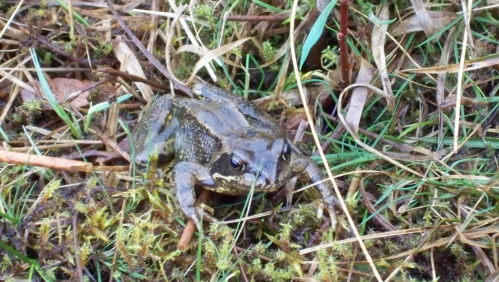 We then returned to the luxurious Kilmartin Bothy for showers and food prepared by our vegetarian masterchef, Trevor Paterson. The area we were working in has a resident deer population and associated ticks lurk on vegetation to attach to animals or people brushing by. Thorough tick searches did uncover some that were quickly removed. If removed as quickly as possible - ideally within twenty-four hours - then the risk of contracting Lyme disease is considered to be very low.

After a well deserved night's sleep we all had breakfast and got organised to leave for the second day's work. The squeaky floorboards of the Bothy acted as substitute alarm clocks! The work was to be more of the same but with a new fire site some 100 metres further up the coast. There was light rain to begin with but it quickly cleared by mid-morning to leave another beautiful day for March. By the end of the day the amount of open ground created was impressive and I hope the marsh fritillary butterfly multiplies to fill this new habitat. As we were leaving for good, approximately ten buckets of water were carried from the sea - whose waters were very clear and shallow - to douse the fire's embers.

There was a minor incident with the minibus getting stuck in a ditch whilst leaving the SNH sheds, but Willie's driving skills and our teamwork made quick work of extricating it. I'm afraid I was asleep for most of the homeward journey, so can't recall very much - except for some really weird music being played. A good time was had by all and particular thanks go to Willie and Sarah McC for driving and Trevor for catering. [Thanks also to Mark for leading and providing some very fine homebaking. - Ed.]