After a glorious spell of May weather, hopes were high for our June residential in (sometimes) sunny Argyll. Especially as last year it didn't rain once! As before, tasks on the menu included control of bracken on the hills of the Taynish peninsula to allow better control of the deer population, and the removal of birch scrub from the Mhoine Mhor bog to reduce the level of water loss.

We permitted ourselves a leisurely early afternoon start from Edinburgh on Sunday 10th June, including an excellent pub lunch at No.1 The Grange in Newington for some of us. Given I'd volunteered to arrange catering for the week, the top notch grub we enjoyed (at a very reasonable price) was somewhat intimidating. Once we'd filled our faces and collected the rest of the party, numbering eight in total, we set off, in promising balmy weather.

First stop was Dumbarton, for a stretch of legs around the nearest supermarket to get all the necessaries for feeding volunteers. Post Dumbarton we drove straight to Kilmartin and the well-appointed Bothy bunkhouse. Naturally, in a slow minibus on slower roads in weekend traffic this took a fair old while.

Catriona and Sarah had volunteered to cook for the first evening, and the rest of us attempted to assist while engaged in the usual flurry of unpacking, trying to find a home for an ungodly number of bread-loaves, making sandwiches for the morrow and so on. Despite this "assistance", Catriona and Sarah produced a wonderful feed in record time; most welcome as lunch seemed far distant at this point.

Dinner was digested, and final preparations made for a 0930 rendezvous at the SNH toolshed, located 17 miles away down the very bumpy track at Taynish, for a day of bracken bashing. Come the morning we made it out with -- I think -- a reduced level of confusion compared to the usual first day, and enjoyed a drive under clear skies through the shortbread-tin villages of Cairnbaan and Tayvallich, meeting Gordon the ranger (and his dog Jock the Jack Russell terrier) in good time.

Our goal for the first day was clearing the bracken in the oak woods to the western side of the Taynish peninsula, right the way down to the seashore. Clearing the bracken helps with deer control measures as Bambi has a reduced number of places to hide. This in turn allows natural regeneration of the forest, as without deer control too many saplings are lost to deer browsing. Choosing our preferred implement (slasher, scythette or even just a Big Stick) we set to.

About 10 minutes after starting work the hitherto great weather didn't seem quite so great anymore: the trees stopped most of the sea breeze, the sun heated the air to sizzling temperatures and from every crevice and nook the horseflies emerged to feast on delicious tender volunteers. Fortunately the bright sun kept the midges away, but even so the sustained attack on the bracken encouraged a blistering pace of work, in some cases literally as our soft city palms were abraded by the unaccustomed labour. (One of course assumes that all this will Do Us Good...)

With the first clearing complete we moved on through the magical primeval glades of the ancient oak woods towards the shore, the welcome prospect of lunch and an even more welcome breeze. Fortunately not all the wildlife was bent on eating us; we saw colourful foxgloves, rather impressive fungi, birds' nests and a rather splendid colony of peacock butterfly caterpillars, feasting on nettles and bracken (and in turn possibly providing lunch for some ants). Out on Loch Sween there were sailing boats and various seabirds. All perfectly idyllic. 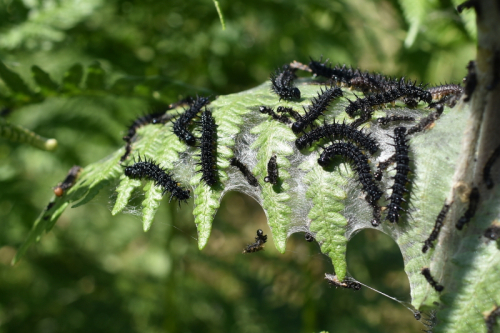 Our final bracken clearing task that first day was back in the woods again. This area came complete with old stone walls and a deer skull that Jock enjoyed howling at in a disconcerting fashion (part of his "daily ritual", we were told). Then, a return to the bothy and a suitably giant dinner. Then torpor, then bed, with the promise of more good weather and bracken on the morrow.

Tuesday's bracken was to be found on the hills of the reserve, where we have often cleared the bracken in previous years. The walk in is long and up a steep track, and the sea of bracken up there is endless - well, seems endless anyway. Hearteningly the clearance efforts seem to be bearing fruit: there's much less bracken and more grass than in previous years. This didn't necessarily mean faster progress though, as the grass tended to resist cutting rather more than the bracken. The excellent views over to Jura and Knapdale more than made up for this, as did the blessed freedom from both horseflies and midges.

Underneath the bracken there's a great deal of archaeology (helpfully labelled as "Platforms" on OS maps). After finding such a place one can speculate on what it was used for in the past when many people made this apparently wild area their home. There's also a surprising diversity of meadow plants and insects. Hopefully further bracken clearance efforts will allow these areas to flourish. 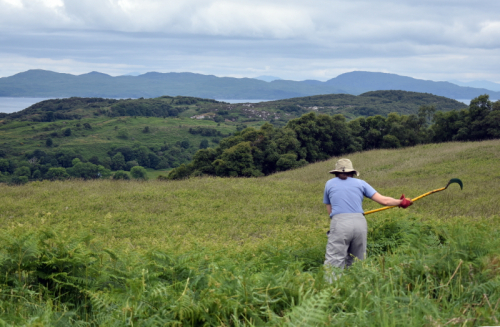 "Does this bracken go all the way to Jura?" (credit: Catriona Anderson) 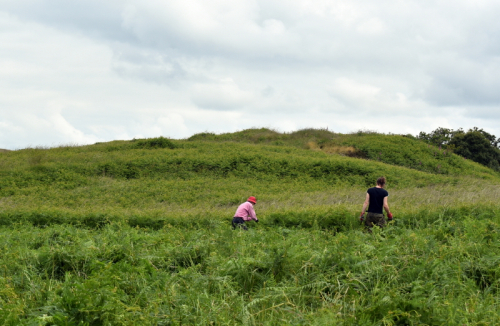 Tony and Willie on a collision course. (credit: Catriona Anderson)

Mix of grass and bracken; rain coming up from the south (credit: Geoff Dart)

Back at the bothy that evening we were happy to find that the bat colony we'd previously seen in one of the neighbouring houses was still active, if not quite so populous as in previous years. Regrettably, bat-watching had to be curtailed once the midges zeroed in on us. We left the midges and the bats to their respective activities and headed back inside.

One final decision had to be taken before bed, and that was where to go on our day off on the Wednesday. Like last year the island of Gigha was the consensus. Sadly the weather forecast for the rest of the week was not so good and we wouldn't get another week of sun like 2017. Indeed a summer storm (Hector) was coming.

Getting to Gigha involves a drive to the Mull of Kintyre and the small port of Tayinloan. We noted with interest the huge quantity of flowering rhododendron ponticum in this part of the world... and the lucky souls with the job of cutting it down and burning it! Though overcast, the day was pleasant, and the short ferry trip to Gigha provided much enjoyment in the form of gannets diving near the boat. 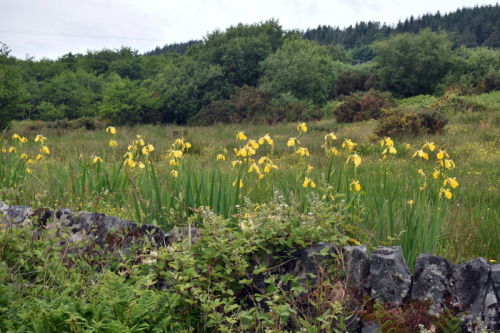 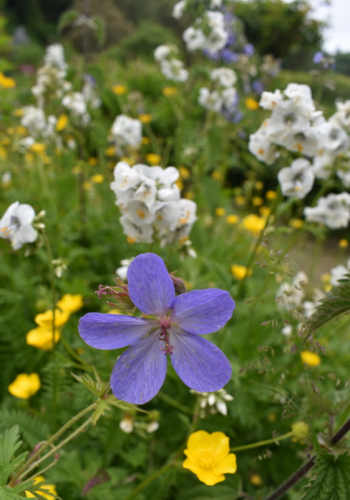 Once on the island itself the majority of the party headed to Achamore gardens. Gigha was the subject of a community buyout in 2002 and the gardens are managed by the community. Accordingly they are not as manicured as some gardens, but this rather adds to their charm. There are rhododendrons (non-ponticum), peacocks, terrifying Victorian garden machinery, an excellent arboretum and more. This includes the infamous skunk cabbage which LCV unsuccessfully attempted to remove from the Mhoine Mhor some years ago. Sadly, with the weather about to turn we only made a short visit to the gardens, followed by lunch in the hotel and a return to the mainland just in case the ferry stopped running.

For the remainder of the day we had a look around the small port of Tarbert and its associated castle, while enjoying the first harbinger of Storm Hector - a steady downpour of rain. Then home to the Bothy for a scratch tea of leftovers. We maintain it's quite acceptable for fifty percent of one's meal to be cheesecake. 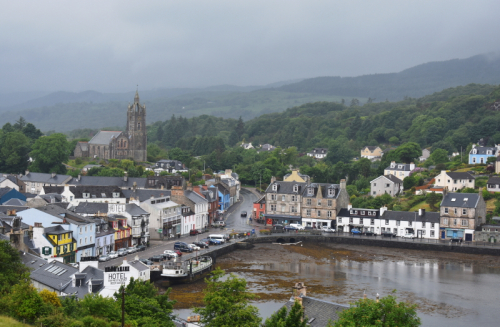 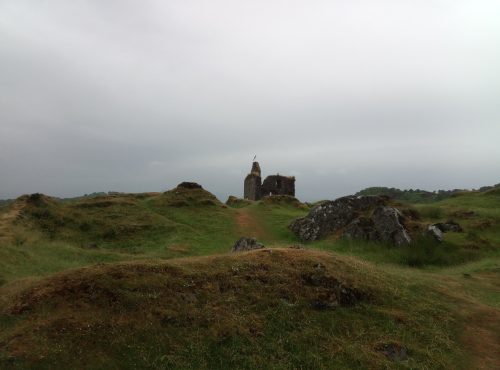 On the Thursday we worked at Mhoine Mhor for a single day, removing the birch scrub from underneath a power line. In contrast to previous years we were working in a smaller area with very dense (and often quite large) scrub trees. Fortunately these were no match for a Tree Popper or two. The weather was once again authentically Scottish; rain showers interspersed with occasional clouds (of midges). Despite this, we cleared an impressive amount of scrub. The dogs even occasionally assisted with tree pulling, in between sleeping on volunteers' jackets. 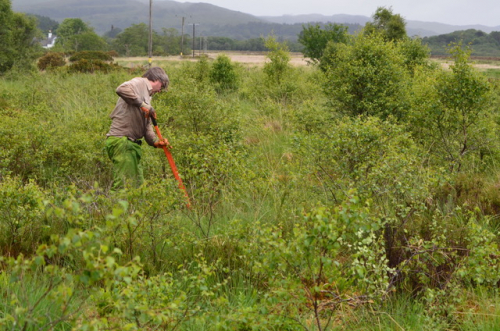 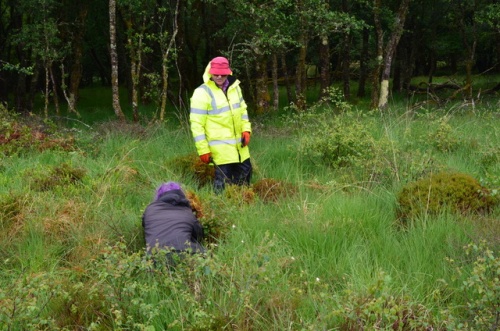 Our final day of work on the Friday was (by popular demand) a return to Taynish for further bracken bashing. An excellent day was had by all despite occasional rain showers plus the need to guard one's lunch from two very hungry dogs. Further work to clear the remaining bracken on the ridge will be undertaken by other volunteer groups later in the year. There's also a possibility of re-equipping with scythes for our next visit, which should speed things up dramatically, as well as reducing the possibilities of blisters. 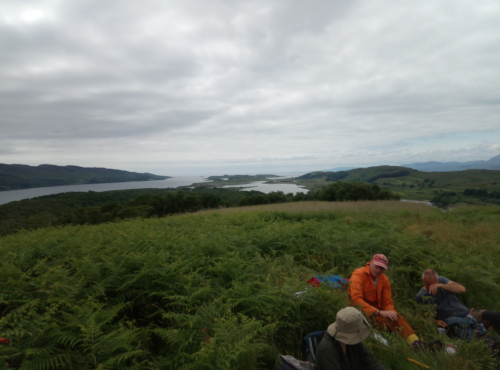 Lunch with Loch Sween in the background (credit: David Nutter) 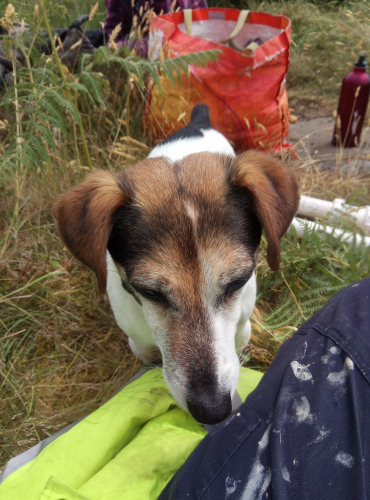 After all that hard work, on our final night in Kilmartin we had a break from cooking and instead went for dinner at the excellent Kilmartin Inn, conveniently situated next door to the bothy. Such repletion ensured that our departure on the Saturday was unhurried, providing ample time to visit the Kilmartin Museum and some of the nearby ancient monuments in Kilmartin Glen. All in all a great trip, and we look forward to our return next year.