"Bring a sleeping bag, a pillowcase, your wellies and full waterproofs", they said. "Bring something warm and dry to change into and a flask for a warming drink on the task", they said. This did not sound like we were expecting sunny weather, but I was looking forward to the adventure so potential cold and wet weather were not a deterrent.

I alighted from the bus on Mayfield Gardens Street and made my way to the rendezvous feeling like I had brought the kitchen sink with me as I shouldered my day pack and tog bag. I was glad to find Chloe at the meeting spot as the garage was sneakily tucked away down a hidden lane I may not have found! Most of the volunteers were already packing tools and gear into the van and Edel, who had taken on the demanding task of feeding us all, had just arrived with the food. And what a feast it turned out to be!

We picked up Meiling and Catriona (who had come all the way from Sheffield for the weekend, 4-5 hours each way by train. Sheer dedication!) along the way and set off to our overnight destination stopping in Moffat along the way for a bite to eat. Our destination was the Carlingwark Outdoor Centre in Castle Douglas, Dumfries and Galloway. The Centre is situated on Carlingwark Loch and by the number of canoes, kayaks and sail-surf boards parked outside the centre, it is clearly a sought-after destination in the warmer months of the year. We were met by Alex Lumsden who showed us the ropes, including setting off the alarm so that we would know what to expect if the place burnt down! 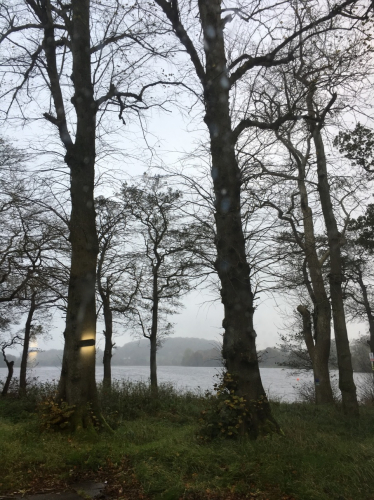 Our first task was to pull birch saplings from the Carsegowan Moss where we would be meeting Chris, the Scottish Wildlife Trust ranger for this site, as well as many other sites. The drive to Carsegowan took us past the extensive tidal flats of the River Cree estuary. As we were on a mission to get to the Moss to start work we did not stop for photos. 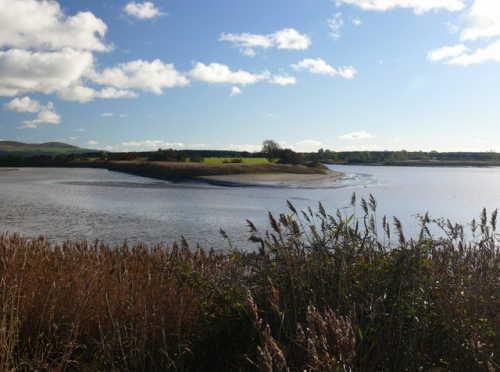 Carsegowan Moss is a lowland, raised peat bog with a spongy carpet of sphagnum mosses and associated peat bog plant species, such as sundews. The sundews are carnivorous plants that live in nutrient-poor habitats and get their nutrients by digesting any insects that have the misfortune to get trapped on their sticky tendrils. Other plants include cranberry, bog-rosemary and various species of heath and heather, the latter which was still in flower for our visit. We were here to rid the Moss of the birch saplings that were invading and drying out the habitat.

Chris gave us some background into past activities such as the abandoned gunpowder factory that was in operation between 1940-1945 to supply gun powder for bombs and shells during WWII, and which closed down after an explosion thought to have been caused by a worker smoking too close to the gunpowder (RCAHMS, 2000). He also told us about the remains of a RAF plane that had crashed into the bog during WWII. We were warned to watch out for places where bog-draining "to improve the land for grazing" (Cloy, 2006) had created waist-deep holes. I am glad I did not find any of those, as I am so small I probably would have been submerged up to my chin!

We were also cautioned about the adders that we might encounter taking shelter under a birch sapling. Although they may be seen as late as October the weather was not conducive to adder sunbathing so we did not get to see this striking reptile. We were told that it is extremely rare for an adder to bite, and after a bit of research on adder venom it appears that the venom is not very strong and thus not particularly dangerous to humans. We did see quite a number of common toads hopping away from our disturbing presence. 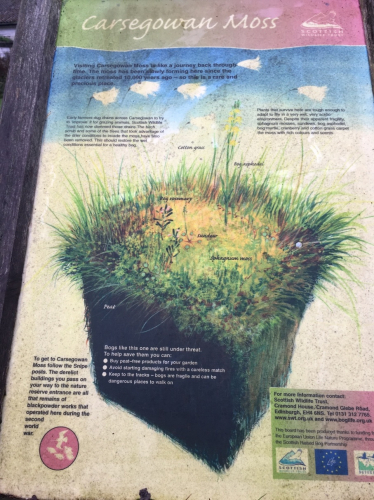 We were working in an area where some pine trees had been planted in the past, and all that now remained were their black skeletons. Birds found at Carsegowan Moss are snipe, hen harriers, merlin, woodcock and many woodland birds in the associated woodland. Unfortunately I did not see any, as I was too busy pulling birches, but apparently the area is good for watching hunting raptors in the winter months.

As is usual for LCV tasks, the tools had to be distributed and the safe-usage instructions given. How to carry tools, how to operate tools, how to place tools down so that they did not permanently maim another volunteer. 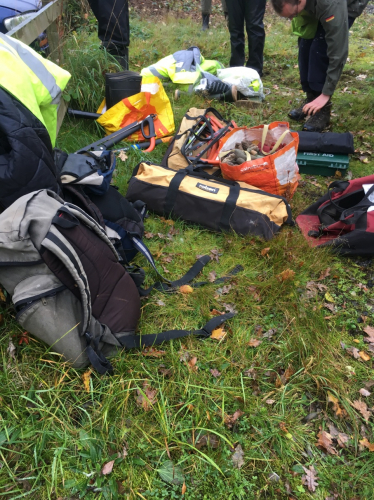 I found the birch saplings particularly obstinate about leaving the safety of the bog. Fortunately David had brought along his favourite tool for the task, the Tree Popper! Coincidentally developed by a South African, my own place of origin. Popper is a bit of an euphemism as the tree popper, all 7.5 kg of it, was not originally designed to "pop" trees out of bogs. It is effective, but I would call it more like wrenching than popping, and the sound sequence in a bog is slurp, swear, slurp, swear, plop! The latter being the sound of the person operating the popper falling over into the bog as the obstinate birch suddenly relinquishes its hold on the peat. 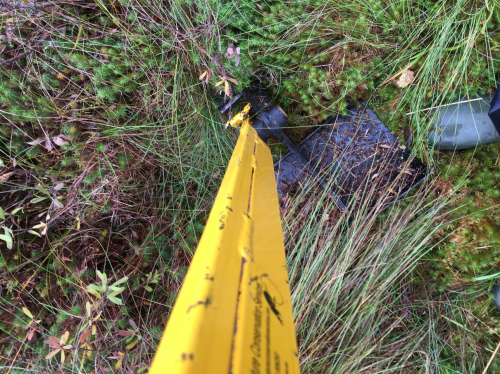 We spread out to work on the birch thickets singly or in pairs and made fairly good progress. It did not pay to look at what still required clearing, rather focus on an area to clear. When we stopped for a well-earned lunch of sandwiches, snacks, crisps and fruit, David produced a treat for the team - gâteau breton, a cake with a prune filling. Delicious! That set us up for the afternoon's attack on the birch saplings. As the weather turned to drizzle/mizzle/dreich/smirr the morning's enthusiasm started to wear thin and we packed up at 4pm instead of 4.30pm

Our driving and navigation team made up of Sarah, Willie and David, who had expertly got us to Castle Douglas the night before and driven us out to Carsegowan in the morning, drove us back in a vehicle with misting windows as we all started to dry out and warm up.

Once everyone had stowed their wet clothing, rucksacks and tools in the splendid drying room at the Centre we showered to rid ourselves of any potential ticks and aching muscles. Then it was time to find out what was planned for supper. With a vegan in our midst, Aurelie, Edel had catered sensitively. We set about peeling butternuts and chopping chillies while Edel worked her magic in the kitchen. The resulting spicy butternut, chickpea, and spinach curry served with naan bread and rice went down extremely well. But Edel had not finished yet, after the meal she produced pudding, a British Bake-Off winning treat! Chocolate brownies with lime sorbet! David even had lime sorbet for breakfast the next morning. 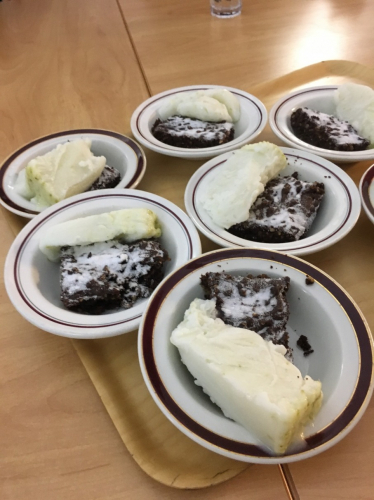 After all that exercise and all the good food, we had a good night's rest and were up bright and early to clean up the Centre, pack our personal belongings, LCV's equipment and head off to the next task.

Sunday's task at Carstramon Wood had variously been reported as repairing a dry stone wall, removing beech seedlings and saplings, and chopping up fallen trees, the work of Storm Ali that swept through the northern UK in September 2018 with winds of 90-100mph creating havoc. I was looking forward to learning how to repair a dry stone wall, but more of that later.

I learnt that the beech clearing was to give other native woodland species a chance to grow as the beech tends to shade out other plants. One of the prettiest trees in the woodland mix, I was disappointed to hear that it was not native to Scotland and interested to hear that it is thought to have been imported to the British Isles by the Romans from the continent, but recent DNA evidence indicates that the UK beech is native to the UK. We walked in to the woods to have a lesson on beech seedling identification. Sarah was the first to spot a seedling. Beech leaves have strong venation, they are slightly crenulated and for me, the diagnostic feature was the sharp buds, on which you could prick your finger like Sleeping Beauty and the spinning wheel spindle. The leaves are a beautiful reddish orange at this time of the year, I must admit to being a fan. 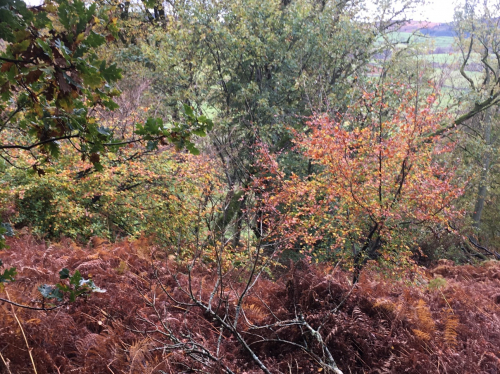 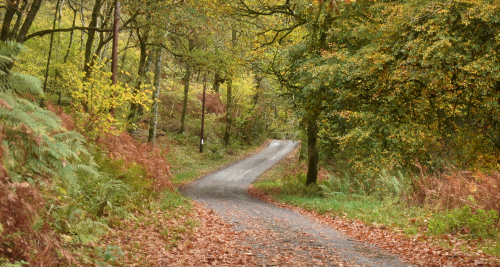 We spent the morning hunting down beech seedlings, well I did, Willie on the other hand was hunting down beech saplings and, with his usual vigour, disposing of them efficiently and expertly. I found most of my seedlings close to or under adult trees and on a few occasions found that the nut was still attached to the growing plant. I wondered whether these were squirrel buried nuts and asked Chris if there were any squirrels in Carstramon. There are apparently red squirrels but they had clearly gone into hiding for our visit. There were also boxes on the trees for Pine Martens and Chris reported that they had on one occasion found some young in one of the boxes.

We stopped for a mid-day snack and David produced his patriotic banana guard. I am going to buy one, it is so outrageous! You can buy them in packs of three on eBay in pink, lime green and banana colour! 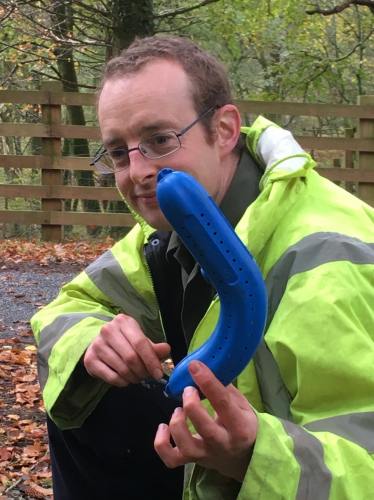 The afternoon was spent dispatching a grand old oak that had been toppled by Storm Ali. So sad, she was an old lady of many seasons. I only counted the inner rings of one of the branches and got to 40 years old. I am sure she was a lot older. We all wore our yellow or orange hard hats. The orange hats had ear defenders and Chris, who was wielding the chain saw with great expertise, also had a visor. He carefully chopped off branches and a team of us went in to remove these when given the go-ahead. They were then passed over the (dry stone) wall to the other team who cut them up further and stacked them. 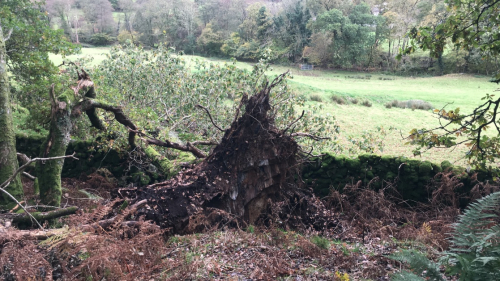 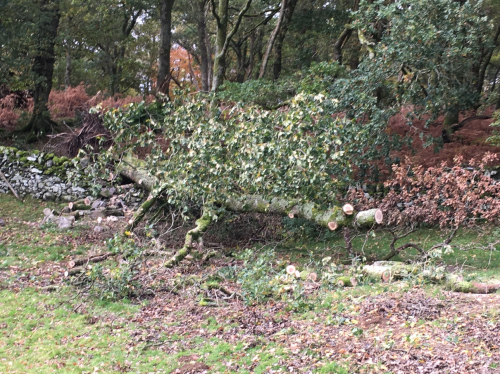 The sheep fled as soon as we climbed over the fence into their field and they heard the chain saw start up. The sheep wisely made their way to the farthest field to safely graze (apologies to J.S. Bach). Chris dispatched the oak with great deliberation, making sure that the huge and heavy main trunk of the tree remained stable the whole time. In the above picture the potential for the tree to collapse and roll if the wrong cut was made can be seen. There were no dramas and the sun came out for our last couple of hours. As the final cut left the oak resting on the wall, we could not make any repairs and instead packed branches along with stones into the gap to make sure that the sheep could not get out of their field. 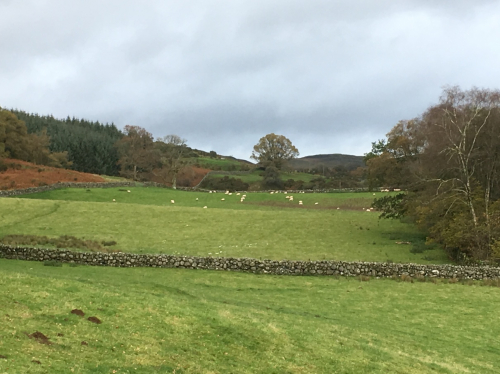 We packed and left promptly at 4pm in order to get Catriona back to Dumfries railway station in time to catch the 5pm train back to Sheffield. She just made it with 5 minutes to spare. LCV went the extra mile by dropping us all off as close to our homes as possible. Peter was seen heading off to his home in Leith Links carrying two bags full of birch saplings which were to be give a new lease of life in another area owned by the Trees for Life programme.