Eight of us set off from Edinburgh on Friday destined for Galloway. After our customary stop in Moffat for deep-fried dinners we arrived at the well-equipped Stronord Outdoor Centre near Newton Stewart. 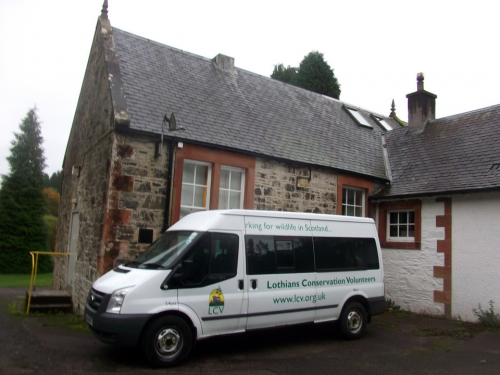 Our worksite for the weekend was to be SWT's Carsegowan Moss, a large raised peat bog near to the Cree estuary. After a fortifying breakfast we met the region's Conservation Manager Chris Archbold who would direct our efforts over the coming two days.

The walk to the bog gave a taste of things to come as we navigated through the waterlogged ground, the old WWII gunpowder works looming above us as we waded past. We admired the newly-built observation platform designed to make the viewing of the bog's summer-breeding ospreys easier, and their nest atop one of the dead pines in the middle of the bog, which made a striking silhouette. 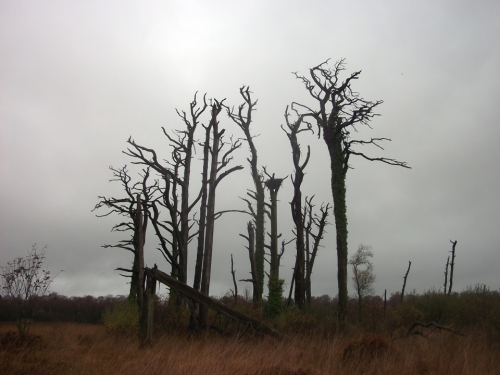 We followed Chris' lead as he found the least boggy path for us to reach our work site at the far side of the moss, by which point we were all glad of our wellies. (Have LCV ever worked on the near side of any bog? Not that I can recall. (yes! - Ed) )

Our job was to spread out across the dome of the heathery-sphagnum and remove any birch or pine trees growing there. The overall aim is to keep the bog as wet as possible thereby encouraging the growth of plants such as cranberry and bog rosemary, and maintaining a good habitat for the resident adders. Any surviving trees soon start drawing water with their roots and dry up the soil so are best eradicated. 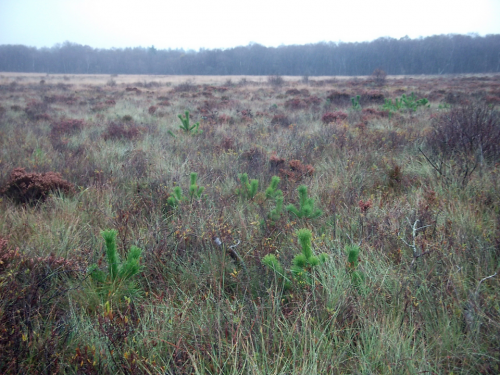 So we set to it, armed with mattocks, spades, saws and loppers, all of which had to be used with their sub-aqua setting turned on as the peaty water soon filled any holes we dug. Our industrial tree-popper proved efficient for many saplings, but there were a number of coppiced birches, which sadly needed to be hand-dug. And so we continued - locate tree, try pulling it up, realise it's pretty stuck, dig around the edge to find the roots, lop/saw through those, pull or mattock the root ball until free of the peat with a satisfying squelch... and repeat. 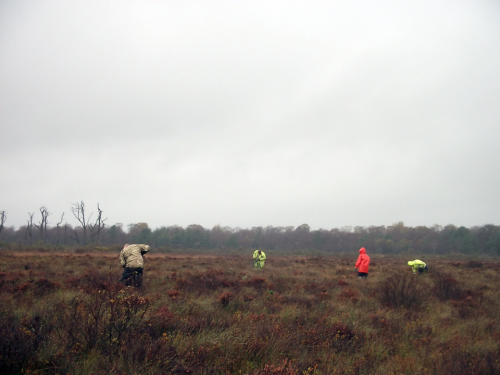 As you might imagine, this was pretty tiring work so we were all glad of the breaks and especially of David's home baking. Having said that, even the simple act of sitting down on the bog proved problematic - what at first seemed to be the ideal spot eventually turned into a muddy puddle, testing the mettle of our waterproof trousers. Mine were certainly found wanting. Willie looked as if he'd just sat in the bath. I suppose this proved that the tree-removal policy was working and the bog was suitably wet. I didn't see it like that at the time, however. 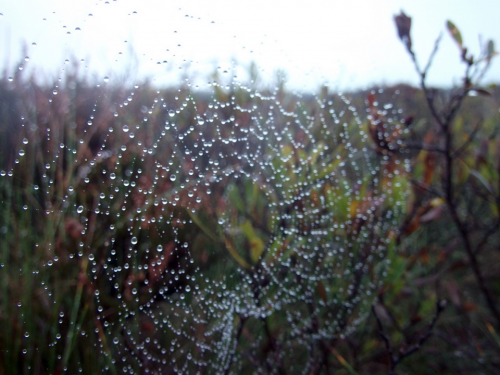 A wet yet strikingly beautiful day on the moss (credit: Catriona Anderson)

Back at Stronord we all eagerly chopped our way through a mountain of vegetables and stuffed enough cannelloni to reach the moon and back in anticipation of another delicious three-course meal from Chef Nutter. I'm ashamed to say that I'd eaten so much I could only manage a single helping of pudding. Generalised torpor followed, with volunteers either wandering around in a dazed fashion, optimistically scraping leftovers into Tupperware in the vain hope that someday our appetites would return, or lying helplessly across the furniture. Eventually we admitted defeat and went to bed early.

Sunday morning meant packing up at the accommodation, marvelling at the efficiency of the drying room which had rendered all our waterproofs dry-if-stiffened, and heading back to the moss. The weather was generally brighter so it was possible to spend the occasional moment resting on my spade and taking in the quiet beauty of the peatland environment with its subtle shades of brown, pink, yellow and green: a lovely autumnal scene. Unfortunately my reveries were somewhat compromised when I noticed that my wellies were sinking, the only solution to which was to start working again. But not before Chris had pointed out the numerous flocks of snipe zig-zagging above us. Or spotting the startled frogs before they clambered hurriedly away. Or considering how the jewel-red cranberries surprised with their vibrancy. I've often thought that though peatland areas might seem featureless and uninspiring to begin with, the longer you spend there the more wildlife reveals itself, and you come to realise what you are trying to conserve. 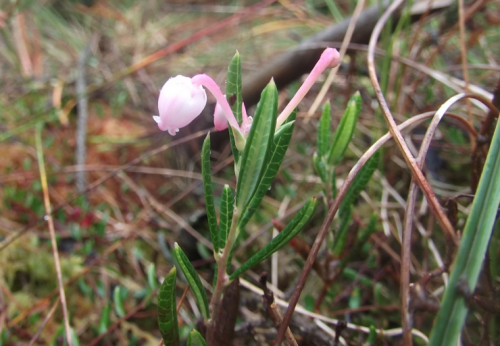 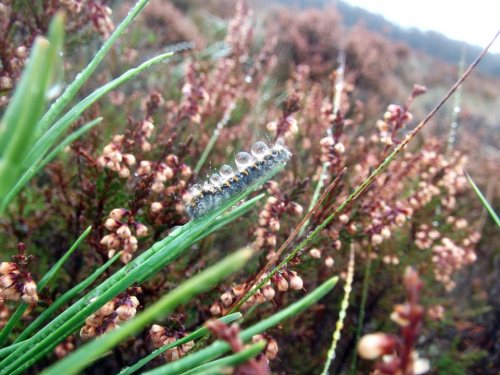 By the end of the day we had covered a fair bit of ground and Chris called a halt when the Traditional End-of-Task Rain Shower began. Time to pack up, squeeze ourselves back into the minibus and drive back to Edinburgh. Thanks to Trevor for leading, David for catering, Willie for driving and to Edel, Ken, Debbie and Catriona for making this yet another fun residential weekend.