Baulking at the thought of spending all of August in Edinburgh, LCV headed, once again, to Argyll for a week's residential task courtesy of Scottish Natural Heritage at the Taynish and Mhoine Mhor NNRs. LCV have been frequent visitors to these two sites over the years and have undertaken various tasks including birch pulling, fence construction and gorse control. While a privilege in itself to visit such a magical part of the world we've also been wowed by the sight of the Knapdale beavers in their new habitat and various other wildlife going about its business.

After a splendid first night in the sumptuous Kilmartin bothy, we headed out to Taynish with high morale; for the sun was shining you see. Regrettably the lush foliage of the temperate woodlands in those parts comes at a cost; frequent and heavy rain. Not today though!

Festivities began with the felling, uprooting and burning of an extensive stand of giant rhododendrons close to Taynish House. Uprooting the mighty stumps proved a challenge (even with mattocks) until a Tirfor winch was deployed which made short work of ripping them out. By early afternoon the entire stand was reduced to a merrily blazing heap and our focus shifted to a similarly large rhododendron next to the derelict dairy building. 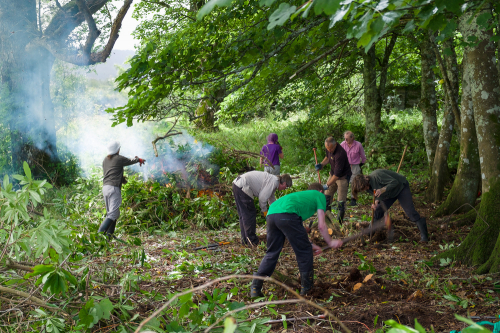 This building is worth an aside: Taynish House and its surrounding estate were something of a rich man's plaything: model dairy buildings with windows for the cows to look out at the world; model piggeries complete with an early attempt at automatic feeding - a stream links the piggery to the kitchens of the house; follies galore. Taynish has them all. Some of the buildings are now somewhat decrepit or put to other use - as a store-room in the case of the dairy - but nonetheless interesting to look at. 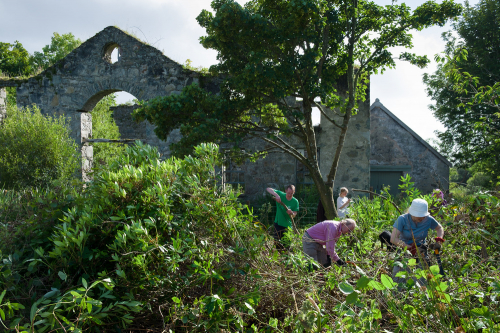 Removal of the mighty, twisty rhododendron would have made looking at this curious building an awful lot easier. Unfortunately by 16:00 on the first day we hadn't quite managed this feat.

On day two, though there was still some rhododendron to destroy at the dairy building, Gordon the ranger opted to take some of the group over to Taynish Island on the eastern side of the peninsula. In previous years this island was used for grazing but with the ending of farming on the peninsula rhododendron has taken over. Four years ago a contractor removed most of the rhododendron and LCV's role was to sweep the island to remove any regenerating plants. "Easy peasy," we thought. The first challenge was to get across to the island which was achieved without too much in the way of nautical mishap. The lack of oars for the boat was initially a challenge but a pinch bar makes a remarkably effective (if heavy) punt-pole. Despite this Walt the Labrador still had time to beat the boat to the island and then swim halfway back to see what was keeping us. 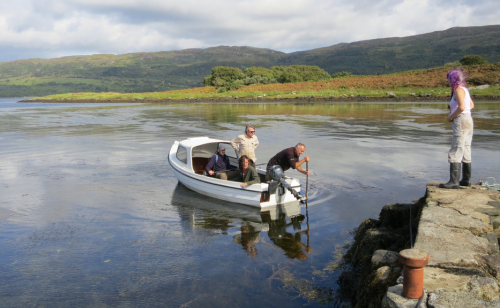 On arrival at the island the main obstacle was obvious - the whole place was choked by bracken which had to be knocked down in order to seek and destroy the rhododendrons. A strong sense of deja-vu developing, the island team started to bash down the bracken with sticks and slashers, grubbing up the small rhododendrons with mattocks when they were found. There were no trees on the island and little topsoil so unfortunately the winch and its ground anchor could not be used.

Meanwhile, back on the mainland the breeze dropped and the midges rose. Unfortunately DEET seemed to act as a tasty condiment rather than any kind of repellent. This encouraged rapid working and a hasty withdrawal to the island after lunch. By now the glorious weather was breaking and a soft rain set in as we knocked off for the day. Rain, as so often out west, would become a feature of the next few days. 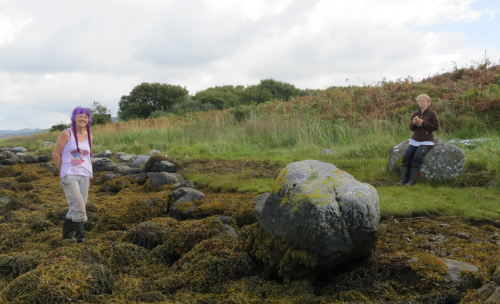 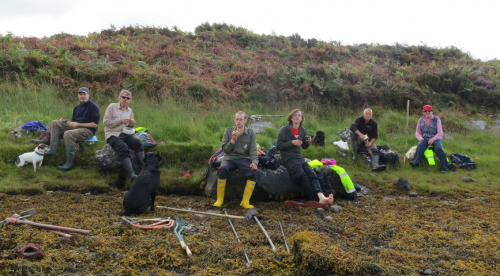 After two days of hard graft we were ready for a break. Given the now shocking deluge pounding the bothy, an indoor activity seemed appropriate so off we went to Cruachan power station for a look see. Impressive, though due to excessive concern for security we were kept well away from all the "interesting bits". We then headed for Oban, stopping at beautiful Glen Nant for a stroll in the woods.

There were blaeberries, lots of insects and loads of impressive trees. It even stopped raining for a while. Sadly by the time we reached Oban normal service had been resumed so we did our necessary shopping, retreated to a coffee shop and then had dinner before heading home, hoping for a better day on the morrow.

Overnight the wind rose slightly and drove some of the rain away, so by the morning the prospect of spending the day on the island completing the clearance was agreeable. So it proved to be, for the morning at least. We covered most of the northern area of the island and made inroads along the western coast all the way to the southern tip. After lunch the wind continued to rise and due to the awkward landing on the island Gordon decided to withdraw to the mainland for a spot of gorse bashing. LCV like nothing better than some uncomplicated destruction so off we went and spent the remainder of the day pushing back gorse encroaching on the pasture land on the east side of the peninsula.

Friday brought a change in both task and weather - we moved operations to Mhoine Mhor for some birch pulling - and the rain got even worse. Despite this we put in a good day amongst the moss uprooting birch and other trees while watching the water level rise and rise. By 15:00 though, conditions were so poor we called it a day and headed back to the bothy. Just in time in fact, as the Kilmartin Burn burst its banks within an hour of our return to the bothy and flooded the road we'd have needed to return on and the road past Kilmartin as well. We had a grandstand view of the council and police trying to sort out the resulting mess. Plus, once the rain finally stopped later that evening the usually tiny waterfall on the hills behind the bothy was a most impressive torrent and well worth going to see.

Though the offer of more gorse bashing remained, after the epic deluge experienced on Friday most of the team were in no mood for further exposure to the elements. Happily Lochgilphead had us covered - not only was the Argyll Show on that weekend but there was a picturesque walk along the Crinan Canal to Ardrishaig, perfect for those for whom the sight of a beautifully-groomed Highland cow was not quite the ticket. Your correspondent, though, was of the former party and thoroughly enjoyed the excavator challenge, livestock show, walking stick demonstration and most importantly the enormous hot roast pork sandwich. 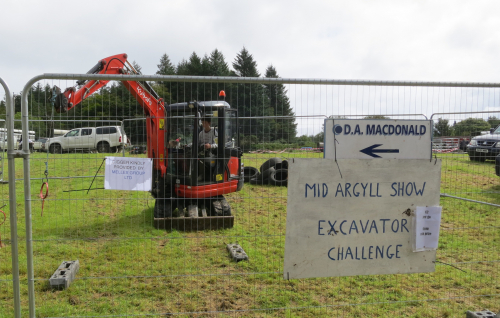 The usual dinner in the Kilmartin Hotel rounded off another great week in Argyll and we look forward to returning in the future.