Late July saw another successful outing helping out SNH in Argyll and Bute with their Taynish and Moine Mhor reserves. Taynish is a fantastic reserve and one of LCV's favourite spots. Much of the reserve is covered in ancient oak woodland (Scotland's very own rainforest) but there are big areas of grassland, heath and saltmarsh as well. On this trip much of our work focussed on clearing bracken from glades within the woodland areas, as well as birch saplings from some of the boglands.

Sunday was a chance for an unusually leisurely start and to get ourselves settled into our accommodation, in the always fabulous Kilmartin Bothy.

Monday dawned rather damp but we summoned our enthusiasm and set off to meet Doug the ranger. He led us across to some new bracken filled glades over on the eastern side of the reserve. These proved to be wet, midge infested and full of frustratingly laying down bracken, but we pushed onwards and soon had the first one clear, while David N. cut a great swathe through the supply of scythettes, breaking two before we stopped for lunch. 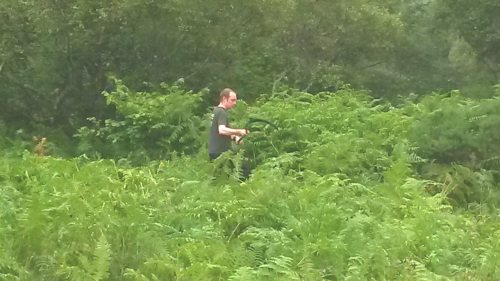 After lunch we pushed on into a larger glade, and though the flies proved no less enthusiastic we still had a good clear area by the end of the day and headed back towards the bus (collecting the victims of David's scythette carnage on the way).

Tuesday dawned damp but we decided to laugh in the face of soggy underwear and headed out onto one of the small bogland areas to clear it of encroaching saplings. 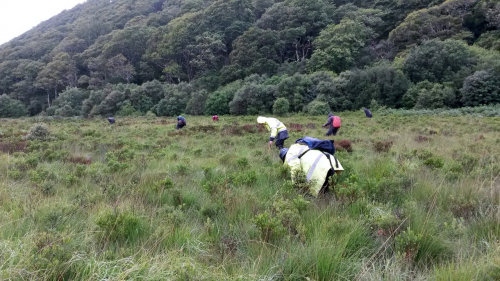 Of course, we were all much more cheerful than we look. (credit: Louisa Martin)

This got more interesting as the day went on as we headed into areas which were increasingly uncertain whether to be land or water. Finally, having investigated the potential for making the ground surface wobble all around us by jumping up and down and peering closely as spider nests we decided to head for home. 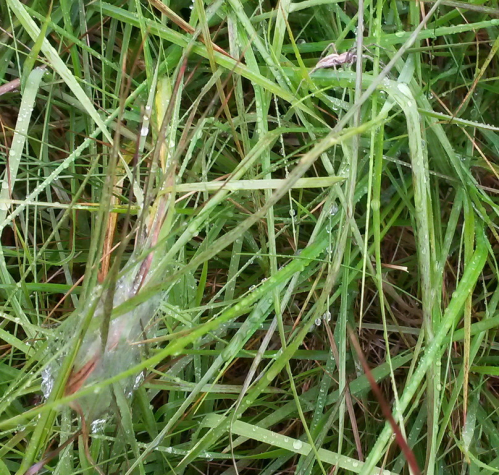 Surprisingly the weather changed for our day off dawning bright, clear and sunny. There were three rival plans, doing nothing, going to Ballachuan Hazlewood and visiting Easdale Island. A glance at a map and a bit of cunning timetabling enabled us to combine all three and so, following a lazy start we headed for a lunch stop and a wander round Ballachuan. This is an SWT reserve with a mix of hazel scrub and open glades and proved to be a really special spot. 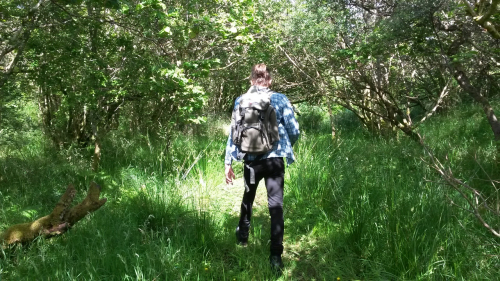 Easdale Island, site of the World Stone Skimming Championships, followed. We gave it a go, but international glory looked to be out of reach. 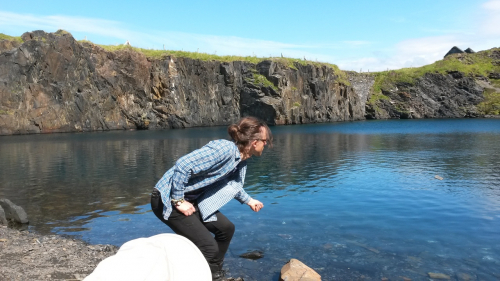 The view and weather were both stunning though, as was the collection of wheelbarrows which form the local alternative to cars. Some consternation ensued when we found the café closed at half four but we boarded the huge ferry and found ourselves a cosy nook on the mainland to sample a few of the local beverages. 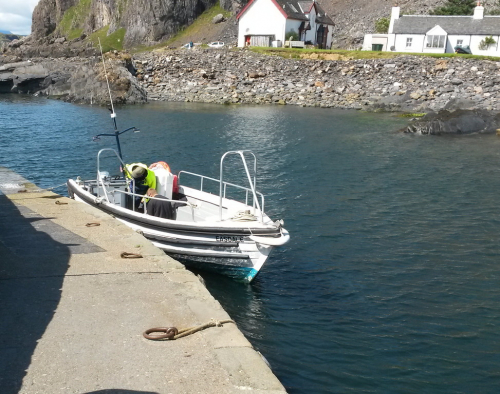 Thursday was another bracken bashing day but in bright sunshine and heading up towards an area we worked in last year and where SNH are using a horse to re-bash the areas we cleared last year. Watching the horse was fun, and luckily, didn't quite put the rest of us to shame. 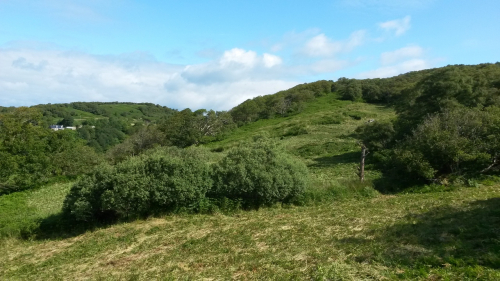 The weather forecast was less than promising for Friday and Doug had planned a day clearing skunk cabbage from the banks of the River Add on a farm adjoining the Moine Mhor reserve. Skunk cabbage is a North American relative of the arums. Plants can grow to about two metres wide and a metre tall and have a leek like underground stem which can go down the best part of a metre. Individual plants can live for 80 years. The plant is spreading on the River Add which is now the focus of a proper eradication plan. For now though Doug and Gordon are just trying to stop it spreading onto the reserve and it was hoped that tackling the clumps on this farmland would help to prevent this.

Thefirst few plants we came across weren't too challenging and the weather held up, but heading on down the river we started to find huge patches of plants, attractively situated in knee deep liquid mud, making both staying upright and digging holes near impossible. We persisted until we'd cleared the first major clump without having anyone fall in the river but after that Doug concluded that the process was just too labour intensive to be justifiable and decided to go to Plan B. We protested feebly, but were not that sorry to call it a day, particularly as the threatened rain was increasingly making its presence felt, and headed back towards the bus taking out a few plants on higher ground along the way. 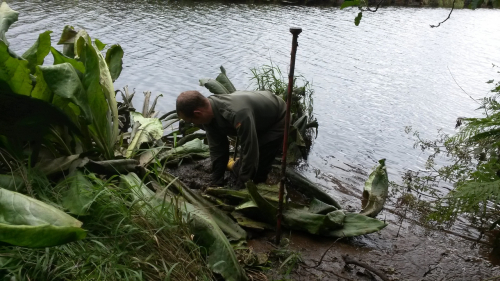 David juggles the triple problem presented by staying upright, not falling in the river and trying to dig in liquid mud. (credit: Louisa Martin)

Saturday was going home day and so we got everything packed and cleaned up and headed off. More rain was forecast but we fitted in a quick visit to Ardkinglas Woodland Garden before the downpour set in and checked out the UK's tallest tree, a 140 year old grand fir, before repairing to a good local pub for lunch and a satisfying view of the downpour from the warm and dry. 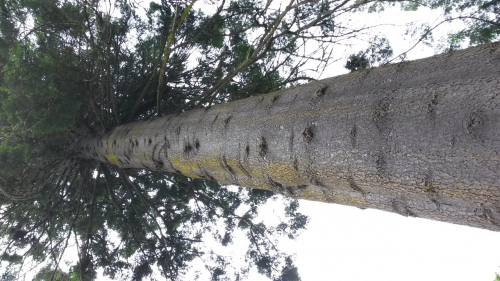 Landfall was made in Edinburgh at about tea time giving us time to clear everything out of the bus ready for its regular Sunday outing the following day.