Dispatches from the Western Front: A report on this year's Summer Resi at Taynish

Taynish is a national nature reserve managed by Scottish Natural Heritage (SNH). The reserve is a very special oak rain forest located on a little finger peninsula into Loch Sween with the Isle of Jura just over the hill. The Moine Mhor — The Great Bog also managed by SNH — is a few miles north in Kilmartin Glen. LCV has worked on both sites in the past and on this trip we continued with the never-ending task of removing young trees from the bog to prevent it from drying out and turning into a forest. In Taynish we slashed and cut huge swathes of bracken to open up the land which would enable flowers to grow and also help with the humane hunting of deer who feed on tree saplings thus inhibiting natural reforestation.

The LCV team (Tony Irving, Trevor Paterson, Debbie Tribak, David Nutter, Louisa Martin, Sarah McConachie, Catriona Anderson, Willie McSporran and myself, Mark Herron) arrived at Kilmartin bothy on a scorcher of an evening on Sunday 13th July. We got ourselves organised and sat down to a beautiful supper pre-prepared by David. Except for the amazingly squeaky floorboards the bothy is 5 star accommodation right beside the Kilmartin Arms Pub.

We were prepared for wet weather but the driving rain and winds on the first work day were a little dispiriting and we certainly made good use of our full waterproofs right from the start of the day. We met Doug the ranger and made our first sweep across the bog towards a white marquee which had been set up for a Countrywise film crew doing a piece on Peatland Action. Birch, sitka spruce and rhododendron were pulled up by the roots to prevent regrowth and Doug supplied mini-mattocks and root saws which came in very handy for the bigger trees. We regrouped in the marquee for shelter and hot drinks intended for the film crew — the weather had curtailed their filming — and it was strange to be mixing with media types.

Despite the severe conditions and varying states of wetness beneath waterproofs we continued, making several sweeps of the bog in a dispersed line formation so that no saplings escaped. The terrain was rough with some flooded ditches to cross via plastic dams. For some reason known only to him, Trevor dispensed with his waterproof trousers and had to wring out his socks and empty his boots of bog water by lunchtime! In the afternoon there was a brief respite from the rain but after drying out a little bit the heavens opened once again and so we called it a day before one of us drowned. In my view, such conditions are good as they make you appreciate the better days even more.

We met Doug and Gordon the rangers at their work shed and were joined by Jock the jack russell and Katie the black lab who helped throughout the day by carrying sticks and eating flies. We were provided with brand new light metal scythes to which we added four of our own bulldog slashers and we set off on the half hour walk to the work site. I've never cut bracken before and so I wasn't expecting the huge expanse of tightly packed, seven-feet-tall monster bracken we were presented with. It was hard work in the very hot weather and we took lots of breaks to take on water.

Working individually, we took bites out of the bracken and these bites slowly joined up and expanded outwards. Blisters were a hazard and some hands were taped up like boxers' with new volunteer Catriona showing great resolve in working through the pain of blisters! 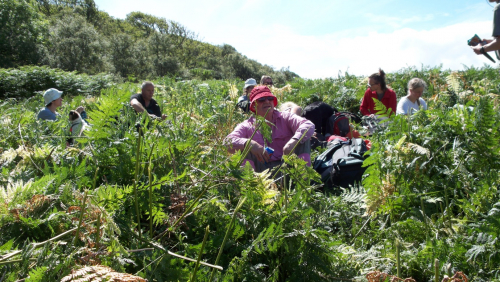 After a coffee stop in a wet Oban we spilt into two groups with Louisa, David and Catriona heading to the Sealife Centre while the rest of us took a walk around Scottish Wildlife Trust's Shian Wood. I was amazed by the amount of lichen growing on the trees and the feel of a real Scottish rain forest. Back at Kilmartin we dined in the very fancy Kilmartin Arms restaurant. 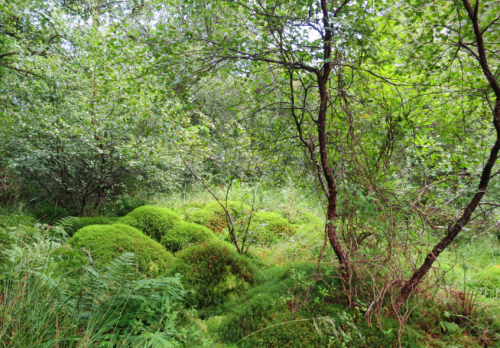 Work Day 3: Back to the Bog and Mixing with Media Types

For our third work day we returned to Moine Mhor which looked very different in scorching sunshine. The sun also brought back the Countrywise film crew who spent some time filming us in the background and then, later in the day, there was a staged filming of us melling plastic dams starring Trevor and Willie in full personal protective equipment. It was a surreal day with the media types around and I look forward to seeing the result on STV in the autumn*.

The presence of the sun enabled us to see more wildlife than earlier in the week, such as some beautiful black and gold caterpillars. 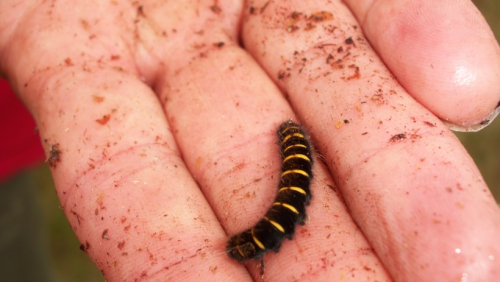 Beautiful black and gold caterpillars - can anyone identify them? (Photo: Mark Herron)

One of the highlights of the week for me was seeing and photographing a large Scottish adder. She was huge and hissing angrily and we all scattered when she reared up from her coil! 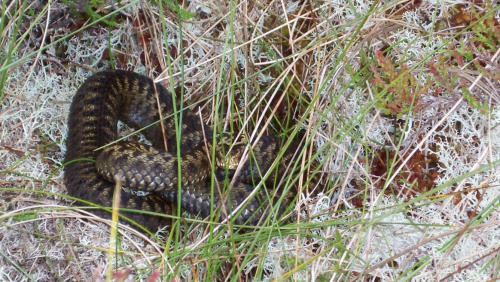 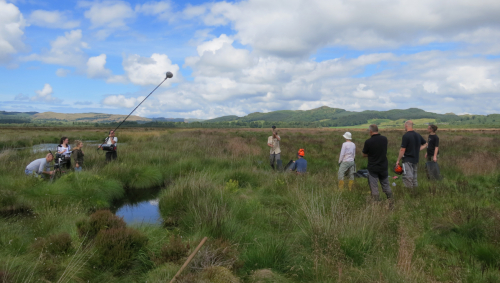 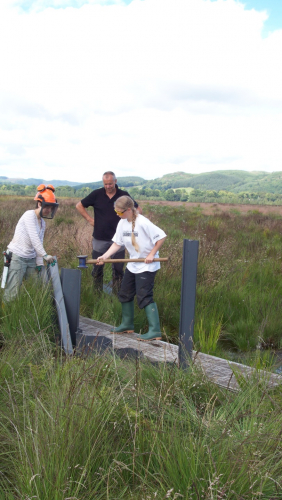 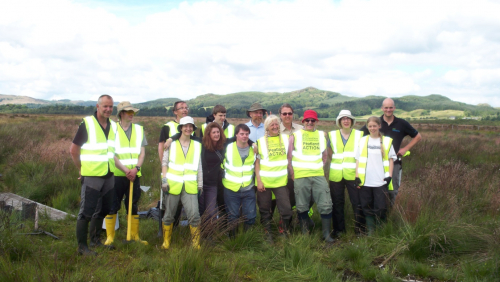 Work day 4: Back to bracken bashing

On Friday we returned to the monster bracken and made one final push to enlarge the area we had opened up. Because of the heat and very hard work we had an early finish at 15.30. This gave us the opportunity to have a relatively early evening meal and a sunset visit to see the beavers in Knapdale. Some saw one briefly in the water but the evidence of their presence could easily be seen with lots of tree gnawing.

It was a pleasure leading a group where things were organised and done with very little instruction and where everyone mucked in. A special thanks to David for organising the catering and to all those who cooked - the food was amazing both in quality and quantity. With the world falling apart with terrible news from Palestine and Ukraine it was great to get away for some hard physical work, some of the best and most surreal comedy outside of the Fringe, and some of the most inspiring scenery and wildlife in the world.

* Sadly the Countrywise feature was not aired so LCV will have to have its five minutes of fame another day.