LCV's previous weekend trips to west Argyll volunteering with SNH around their local reserves have always been popular, even in midwinter conditions. So it was no surprise that nine of us were keen to sign up for a week-long summer task at the end of July. Whether it is the stunning remote scenery, the variety of interesting conservation tasks undertaken, the enthusiasm of the rangers or simply the deluxe (en-suite!) accommodation provided in the Kilmartin bothy: we keep coming back for more.

Predictably we arrived a fortnight after the long hot summer had broken, so our first day, which was spent removing invading birch and spruce from the massive Moine Mhor raised bog, allowed us to re-experience the challenges of west-coast rain squalls. 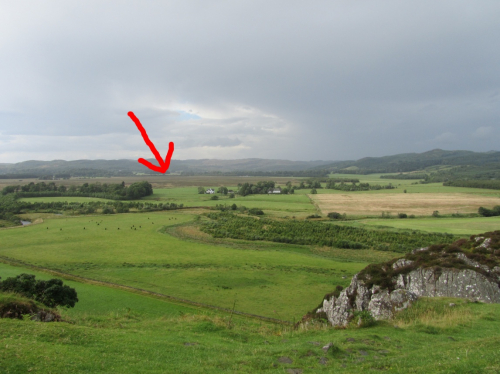 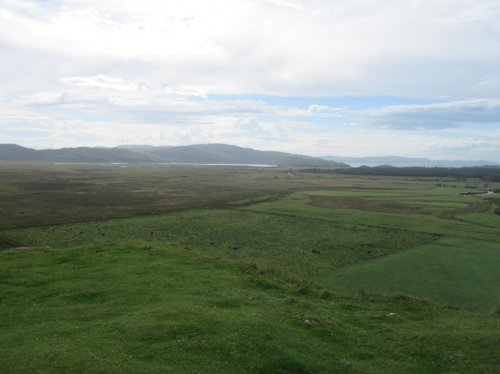 Moine Mhor from the south from Dunadd (credit: Louisa Martin)

Even the smaller "half" of the Great Moss, lying north of River Add, dwarfs Edinburgh's own Red Moss. After a long hard day fighting our way over the broken terrain, inevitably topping our wellies in hidden drainage ditches, we were glad to get back for hot showers and the usual fine communal dining. Although we have often been colder and wetter working here, I suspect most of us were looking forward to a more relaxing second day out. If only... 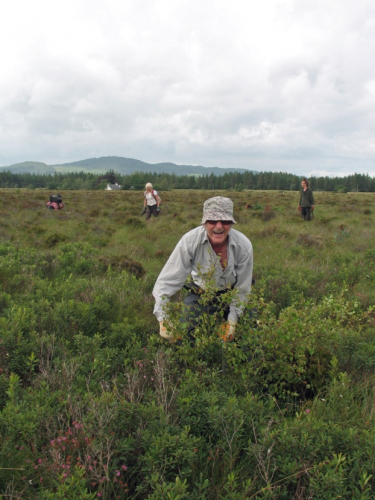 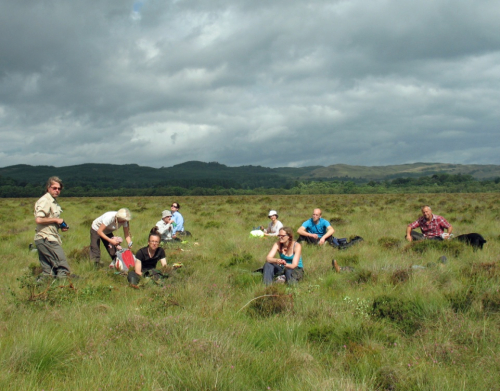 So day two was back on the bog for more of the same, only in fine sunny weather with a midge-repelling gentle breeze: heaven. We positively skipped along trying to finish the northern section so we wouldn't have to return for a third day. If only...

But the good weather allowed us to enjoy more of the wildlife and the SNH rangers Doug, Gordon and David were running to and fro photographing every caterpillar and bug we found. We saw hen harriers, dragon flies, an adder - well, just the skin - and one of Britain's weirdest caterpillars, the vapourer. Being relatively clean and happy at the end of the day, we were able to squeeze in a pre-dinner visit to the beaver trial's visitor centre at Barnluasgan in Knapdale, where we were booked on a ninety-minute guided walk around to Loch Coille-Bharr. Most of us had been there before, so weren't surprised that although we saw plenty of evidence of beavers, they weren't willing to come out and put on a show for a group of thirty-odd noisy tourists. However, we did get a top tip for later in the week.... 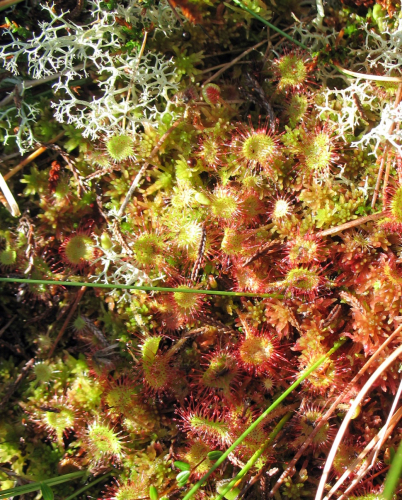 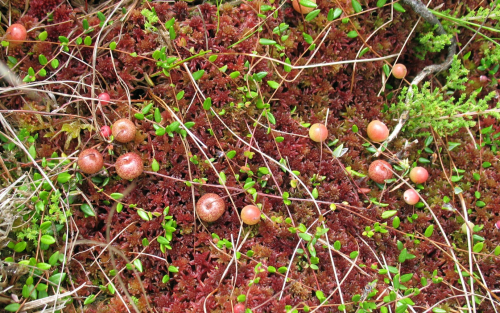 No-one suggested working through Wednesday, our rest day, so we headed up to Oban and across to the Isle of Kerrera for a day trip. Whilst we weren't tempted into the icy sea for a dip, the island has everything for a perfect summer excursion i.e. an imposing ruined castle, a quaint tea room and wonderful geology (apparently). If we had looked at a real map rather than the cartoon on a free leaflet we might have planned a less ambitious walk, but at least it gave us an appetite for our tea out in the Kilmartin Hotel that evening. 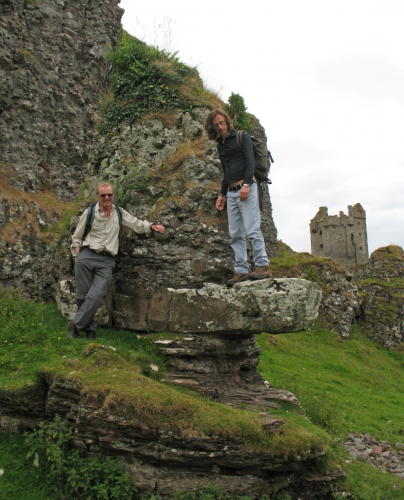 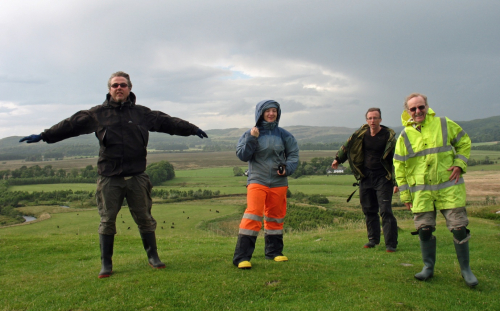 Ranger Doug made himself very popular on Thursday by taking us down to Taynish NNR and setting us loose on a vast expanse of dense, head-high bracken, armed with slashers, grass hooks, scythettes and adrenaline. This ungrazed ridge (cnap) down the centre of the Taynish oak forest is over-run by bracken, crowding out the possibility of trees regenerating or a flower meadow developing. By the end of the day nine LCV-ers, two rangers and three local regular volunteers had managed to completely knock back a significant swathe of the plant - but it did seem a drop in the ocean. 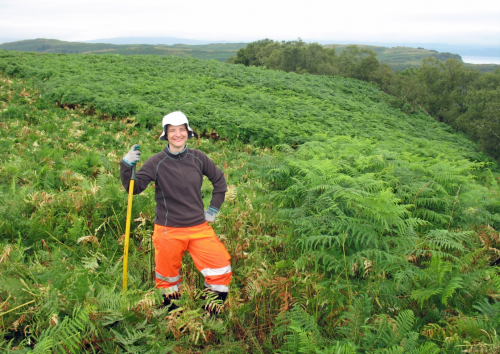 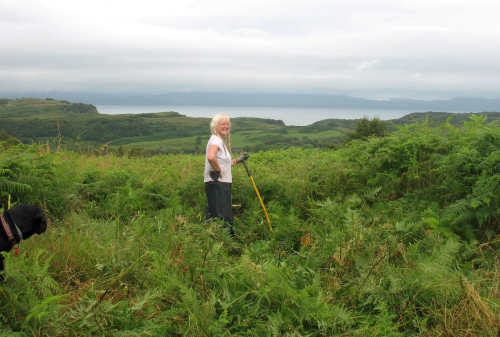 Inevitably Friday saw us back on the moss for one last push to finish the northern section. Again the weather was fine and we were further encouraged by the promise of some minor birch brashing and clearance in the afternoon. Visitor paths from the Tileworks car park lead to a boardwalk and pond viewing platform, and clearing the scrubby birch along the path edge allows visitors a better view across Moine Mhor. As the weather was drawing in, and we didn't fancy getting soaked on our last afternoon, we packed up sharp, leaving us plenty of time to scale the small but impressive hill fort of Dunadd. From here we could see the true extent of Moine Mhor.

With all our duties done and everyone showered and fed, we had one last outing planned, to visit the beaver lodge on Loch Buic where we were promised a high probability of eventually seeing the elusive creatures. The large unruly pile of timber on top of the lodge is clearly visible opposite a small boat jetty. Amazingly, this time we weren't disappointed and had several good sightings of a beaver swimming slowly around the loch as twilight fell. The bats, frogs and even a newt that we came across on our walk back to the bus, added to the evening's success.

Packing up and driving back to Edinburgh on Saturday morning was less frantic than usual on a weekend task, and we were hoping to stop off at a couple of interesting nature spots on the way back east. However the weather turned foul just as we pulled in to Ardkinglas Woodland Garden, so we gave it a miss and headed home.

Thanks to everyone for their hard work over the week, especially as it was one of the more strenuous tasks LCV has been on for some time, and thanks to everyone for chipping in with the cooking, cleaning, driving and leading that is so essential to having a successful trip. And thanks once more to our hosts at SNH who always provide us with worthwhile and challenging tasks.