It was a small group (Mark, James and I) who left Edinburgh for the now-familiar Scone Palace to tackle the regal rhododendrons once again.

First stop was the supermarket where, knowing that we would be joined by several others over the course of the week, we piled our trolley higher and higher. This probably bemused our fellow-shoppers: what on earth were we stockpiling for?

We arrived at the Factor's House in plenty of time for me to prepare our evening meal, for James to manhandle the electric radiators up the stairs and for Mark to wipe down the building's every available surface: Environmental Health Officers never rest, it seems.

First thing the next morning we met with the estate's Head Gardener, Brian, who explained that our task was to cut and burn an invasive patch of rhododendron from a wetland area. Being one of our favourite jobs this news was met with much enthusiasm.

Over the course of the next few days our numbers swelled as Trevor, Christine, Willie and Ian drove to Scone on day trips, variously transporting Debbie, Alexandra, Edel, Greg P, Tony, David N, Ken and Sarah H. Greg M, Tim and Maddy joined the three of us in the Factor's House.

While initially coping with horizontal sleet and uncooperative rhoddie, our spirits, and the weather, improved throughout the week and we relentlessly cleared the invader from the woodland. Morale was boosted by numerous tea breaks, warming fire-baked tatties one lunchtime and titbits from everybody's leftover Christmas sweeties. 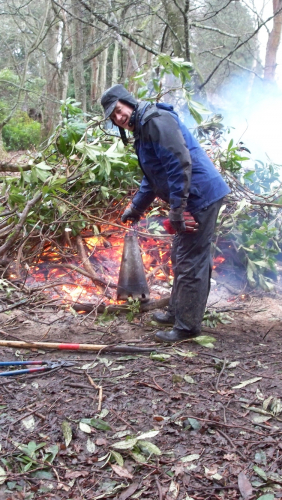 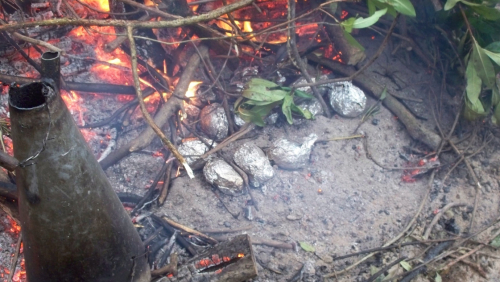 The Factor's House was at its busiest on Hogmanay night, and after another fine meal we enjoyed a lovely evening walk to the fire site while we awaited midnight. A tawny owl hooted as we indulged ourselves in the traditional pagan fire ritual of poking at the still-glowing embers for a bit, hopping around to keep warm and then finally admitting that we'd be more comfortable back inside, just in time for the bells.

Customarily an LCV Day Off, January 1st dawned crisp, beautifully clear and sunny. We reacquainted ourselves with the pinetum and undertook a little light tree-measuring - now a seemingly regular occurrence for LCV at Scone. We were pleased to see that the restoration work to the historic archway, previously damaged by an errant white van (not ours, I hasten to add...) was complete, and impressive. 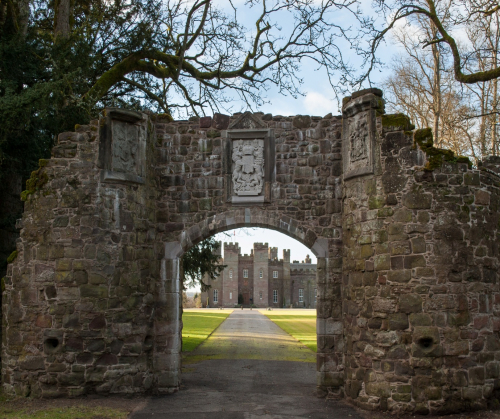 We then jumped into the van and drove into Perth because Tim, true to form, had "A Plan." Our mission was to find evidence of beavers in the river Tay - an exciting prospect indeed. Things got off to an unpromising start. We drove into an industrial estate. We parked next to a factory. We listened to the moderate hum of the A9 traffic. Beavers near here? Surely not!

However, we quickly found a peaceful riverside walkway populated by dog-walkers and cyclists. Although an attractive stroll, finding beavers seemed increasingly unlikely and our spirits sagged. But Mark's devotion to Autumnwatch paid off - he was the first to spot a pile of de-barked twigs, and was able to assure us that this was typical beaver feeding behaviour. Sure enough, close inspection of the gleaming white sticks revealed obvious castorine tooth marks. 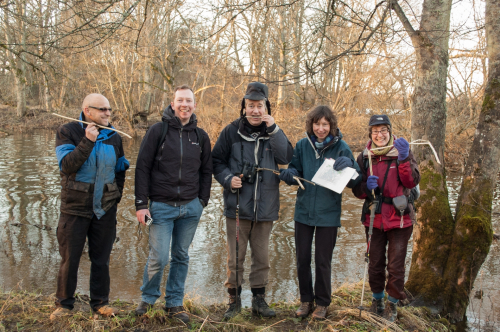 But that wasn't all - as we wandered along the river bank we began to spot signs of nibbling activity on several of the waterside trees. Finally, a most impressive apple-core-shaped tree trunk came into view. No doubt this time - beavers were definitely in residence. Moreover they were living in a stretch of river between motorway and rail bridges just metres from a well-used public path. It was reassuring to compare this environment to the utter tranquillity of SWT's Knapdale site which we had visited during a previous Taynish residential: clearly they are adaptable creatures. 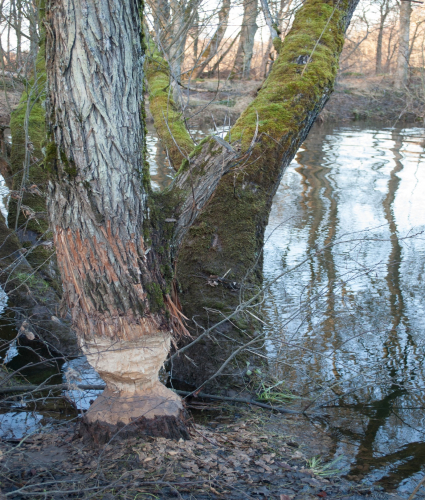 Refreshed, the rhoddie slaying continued apace the following day bringing the resi to a close. The usual post-apocalyptic landscape of smouldering embers peopled by weary and aching volunteers marked the end of another LCV job well done.

Thanks go to Mark for leading; to James, Greg M, Tim and Maddy for cooking; to Trevor, Christine, Willie and Ian for ferrying the day trippers and to Debbie for co-ordinating the transport.