In July 2012 a crack team of volunteers took up residence in the decaying grandeur of the Factor's House at Scone Palace for the latest in a series of competitions against their arch-nemesis: Rhododendron ponticum. It is possible that some kind of sporting event was taking place in London at the time, but the details rather escaped our notice.

The Factor's House accommodation was basic and practically designed for the needs of LCV. Namely, a big larder for food, sufficient rooms for more than one each and a spacious scullery for storing muddy boots and tools. There was even a large garden frequented by roe deer of an evening. After all, who really needs carpets or light fittings?

The arenas decided upon by the Master of Ceremonies Brian Cunningham - who passes the time otherwise as Head Gardener - were two sites in the palace grounds; namely the pinetum and a spot close to the children's play park. Destroying the rhododendron here would help to prevent the potential spread of sudden oak death to important specimen trees in the pinetum and allow expansion of native tree planting activities. 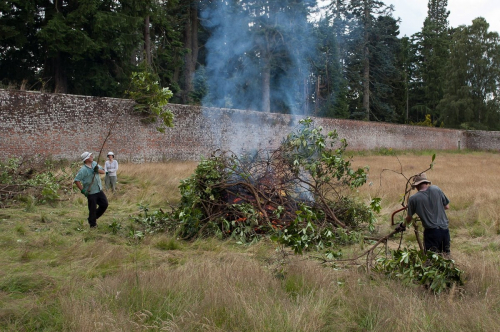 Burning in the walled garden

The games began on Sunday with the felling of a stand of rhododendron at the rear of the pinetum. There was a brief exhibition bout of Door Smashing to permit access to the walled garden where, after a ferocious 100m Rhododendron Drag, we burned the remains of our comprehensively-vanquished foe. 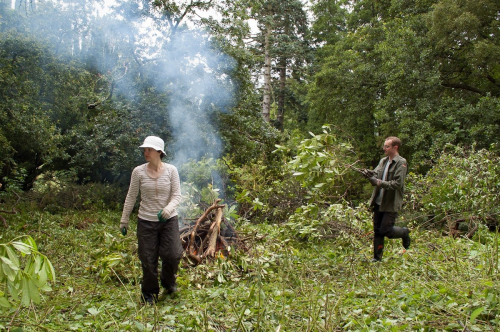 Of course, after achieving the zenith of athletic performance some relaxation was required, prior to further battle on the morrow. Happily this could be combined with watching the fire to make sure it burned out safely. Such performance requires appropriate nourishment and our team of caterers did us proud for the week, despite the immense appetites of the rhododendron-slayers.

Day two featured some further burning in the walled garden and a new event: Tree Trunk Hurling. In addition to the rhododendron there was a large quantity of fallen tree to burn. This material was extremely useful in weighing down the springy and uncooperative rhododendron when on the fire. Even in death the beastly stuff put up quite a fight, evidenced by the numerous bruises and scrapes suffered by volunteers at the end of the week. A large log thrown onto the top of the fire ended any further rhodi resistance though. 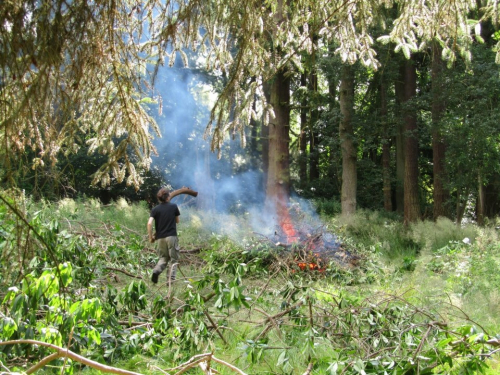 As part of the Games' cultural programme, LCV visited the Highland Wildlife Park to see the various exotic creatures there, and the Loch of the Lowes reserve in Dunkeld. There we were lucky enough to witness an attempted incursion by another osprey into the territory of Lady and her offspring. Very exciting.

The remainder of the events included further work at the pinetum - including the biggest fire yet - plus clearing a particularly boggy area by the children's play park. The challenges there included dismantling rhododendrons while simultaneously swatting mosquitoes and trying throughout not to fall into the bog.

There was still time for a go on the zipwire, however. Not just for children as it turns out!

The closing ceremony involved pouring copious quantities of water onto our last fire to extinguish it before we left. Very time consuming, but the clouds of steam were pretty enough to make it worthwhile. Then it was time to pack up all our gear back at the Factor's House and depart. We look forward to our next opportunity to meet the rhododendrons in mortal combat. Thanks go to Louisa for catering and Willie and Sarah for driving. [And also to David for leading-Ed.]