The trainspotting screefers of Alness: May 2012 Residential

On Friday 4 May nine of us set off for Alness in Easter Ross for a weekend of tree planting and associated tasks at a worksite new to LCV. We stopped in Aviemore, marvelled at the snowy Cairngorms and refuelled at the chippy before setting off for the second leg to Sleeperzzz hostel in Rogart, near Golspie. This is similar to the bunkhouse at Glenfinnan, consisting of several converted old-style train carriages. [And First Class compartments at that! -Ed.] On the way we passed Loch Fleet, the site of a previous summer resi.

The next morning dawned dry with a chorus provided by a nearby rookery and we set off for the site travelling over the Struie road. There we met our client Simon Lockwood who gave us an overview of the plans for the plantation and enhanced our vocabulary by teaching us the word "screefing". This, we learned, means to remove the vegetation around the base of a tree to limit vegetative competition and vole damage. Simon and his associates are planting an extensive area with a varied past and a bright future.

We then set to work, with groups preparing fence posts, removing an old barbed wire fence and building exclosures. The weather was reminiscent of March with blustery sleet and snow showers but we were bolstered by soup provided by Simon's partner Mary. Work continued apace and towards the late afternoon we began to plant trees within our new exclosures. We returned to Rogart and Edel provided us with a fine dinner. 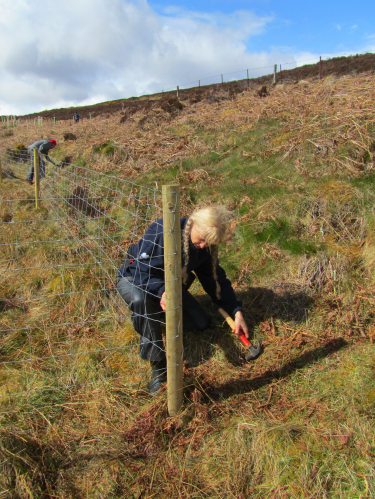 Sunday began dry, cold and bright with the rookery providing another alarm call, and so began round two. On cresting the central hill, both the site's scale and its place within the extensive vista became apparent. We began planting and tubing in earnest with the fence post preparation continuing to its conclusion. The weather gods provided something for everyone with bright sunny spells and wintery showers in turn. Undeterred, we continued planting and tubing until all too soon it was time to pack up and return south with Aviemore again providing chips for us and diesel for the bus. The snow fairy had been good to the Cairngorms as they now had even more deep, crisp and even covering to rescue their ski season. 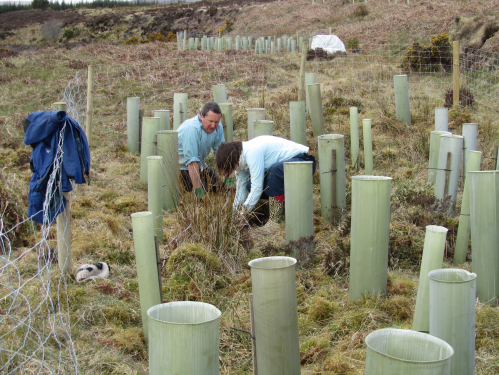 Ian and Helen planting in the enclosure

Suitably energised we resumed southward to Edinburgh where we arrived tired but refreshed from a successful weekend. Thanks to Debbie for leading, Edel for catering and Sarah and Louisa for driving. [And thanks also go to Willie for driving without recourse to bagpipe music on the radio. - Ed.]