A New Site for Summer

Late summer 2015 has seen the arrival of a new site for LCV, Little Boghead Nature Park. Formerly an area of gravel pits and situated on the southwest side of Bathgate this is a West Lothian Council owned site which was set up by a local community group and visited, in 2005, by the Princess Royal.

Regrettably, over the last decade the site has had less tender loving care than it has been needing and there is a lot of work to do to restore it to its former glory, maintain its quality as a wildlife habitat and ensure that it meets the needs of the local community as well. 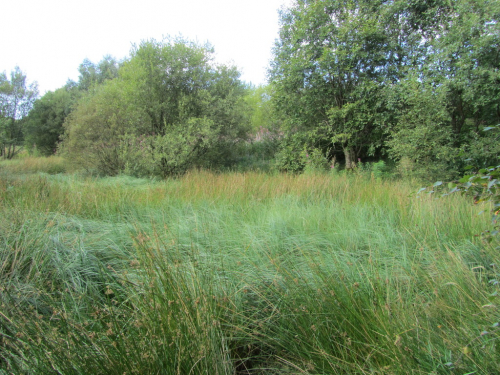 One of the choked and overgrown ponds (credit: Louisa Martin)

WLC have carried out an extensive public consultation process in order to establish local aspirations for the site and are currently carrying out ecological surveys and finalising a management plan for this site, as well as for a large adjoining site which has recently been declared too wet for house building.

The council and local residents have done a great job of clearing the site of shopping trolleys, abandoned bicycles, tin cans and an extensive range of other types of litter and now there is a need for some serious conservation work. Enter LCV.

On our first trip out to the site we had to find the ponds and boardwalks before we could even begin to think about clearing them and so spent a morning felling surrounding and overhanging trees before heading into the water itself to clear out weed and reeds which had entirely choked the open area. By the end of the day the first pond area was surrounded by discarded vegetation and a whole section of lost boardwalk had been revealed, along with a dipping platform, albeit slightly less structurally sound than it must have been originally.

There was no trouble finding the pond on the second trip and we spent the morning taking out the remaining trees before setting about tackling the discarded vegetation from the last trip, wheelbarrowing it away to a less obvious location where it can rot down in peace without re-filling the pond with excess nutrients. 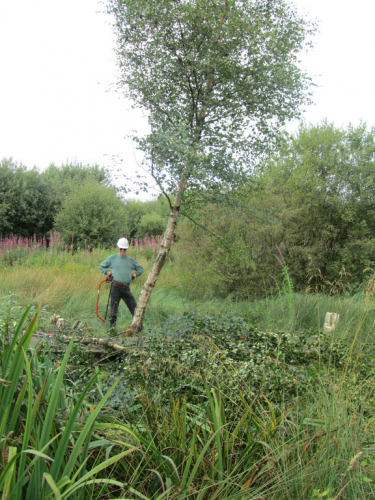 It was warm and sunny and this was heavy work and so we took frequent breaks to admire buzzards, two of the dragonfly/damselfly species, two of the bumblebees and at least one of the amphibians (there might have been some newt tadpoles too, but we weren't sure).

A few of the local residents (credit: Louisa Martin)

Once we were done with the removals the group split into two with half jumping back into the pond to clear more vegetation, revealing the second section of boardwalk and half going to tackle some dogwood which is badly overgrowing a path on the other side of the site.

Our third trip featured an assault on a new pond that we'd not even managed to spot before and leaving, so we are told, a huge new pile of reeds draining that we are looking forward to moving on our fourth trip. It should be fun! 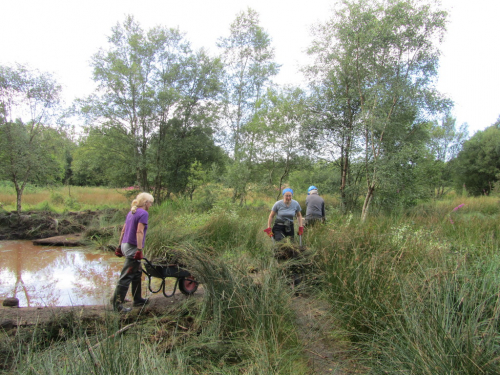 Barrowing away reeds from a cleared pond (credit: Louisa Martin)