After clearing up and sharing out the leftovers from a very delicious and filling meal about twenty of us headed over to the Sheep Heid Inn in Duddingston village for a game or two of traditional skittles at Scotland's oldest skittle alley.

I had never played skittles here and I wasn't too sure what to expect, but I was pleasantly surprised. The pub is a fantastic venue with the skittle alley being hidden away at the back. We had booked both lanes so had the whole alley to ourselves. 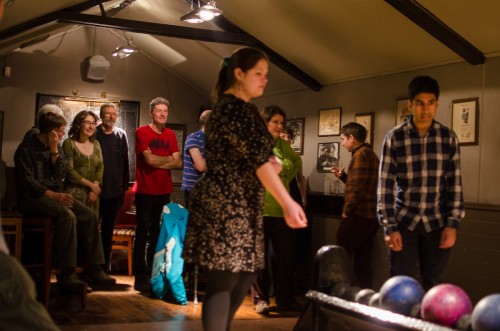 We split the group into two teams and after watching those who had most definitely played skittles before show off their bowling techniques, we all got stuck in. The game had a novel "do-it-yourself" element which involved two people waiting at the end of each lane, each carefully tucked away to avoid the hurtling balls. Their job was to pick up and rearrange the skittles and then return the balls to the start ready for the next round. I found watching everyone play as much fun as actually taking my own turn: it was clear that old skittle rivalries were alive and well! 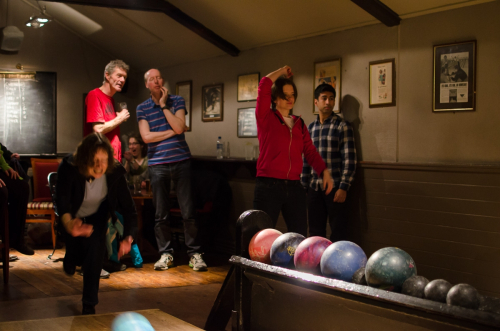 Towards the end of our two hours we tallied up the scores on the chalk board to find the person with the winning score. Ken Humphreys was duly awarded with the LCV Skittles trophy which he'll keep in his trophy cabinet until our next game.

I had an excellent night and it looked as if everyone else did too. Well done to Ken and thanks to everyone who came along for making it such a fun occasion. Let's do this again soon! [And thanks go to Rachael for organising this event.]