Thirty people. Twenty thousand pounds. No agreement about what to spend it on. So how do you get a roomful of people to agree on something, make sure that everyone's opinion is heard and not take hours and hours and hours over it?

We started with lots of equipment. Nicola took me at my word when I said we'd need lots of Post-it Notes and marker pens and had bought a mountain of stationery in a range of striking colours. She had also found some really cool flipchart paper that stuck to the wall by itself. I was deeply impressed, even if nobody else was. I used to facilitate events like this for a living, and I appreciate having the right gear. We were certainly well set up for the challenge.

Louisa introduced the session eloquently, and I followed with an outline of the agenda and rules ('silence means agreement', 'one person talking at a time', 'we're collectively responsible for the success of this event' and so on) and then we moved into the first stage. I took great pleasure in pointing out that we were bang on schedule according to the timings shown on the agenda.

The first stage was a 'Gallery of Ideas'. The way this works is that each person in the room sits by themselves and thinks up ideas for how we might spend Colin's legacy. We encourage any idea, however unlikely it might seem, so this is a kind of collective brainstorming. Each time someone has an idea, they write it on a Post-it Note. When they have a pile of Notes in front of them, they stick them on the wall (although in our case it was actually the window). The hall went quiet save for the sound of marker pen squeaking on Post-it Note (and Sarah, Nicola and Rachael working hard in the kitchen). The first few Post-it Notes appeared on the window. The trickle grew into a flood and suddenly there were hundreds of Notes filling the windows along the length of the hall. As you'd expect, lots of people had similar ideas, but there were also lots of unique suggestions. Some of these were brilliant and some were quite frankly bonkers ('buy Alex Salmond some tartan trews', for example), and they all contributed to getting a feeling for what the people in the room thought was important. 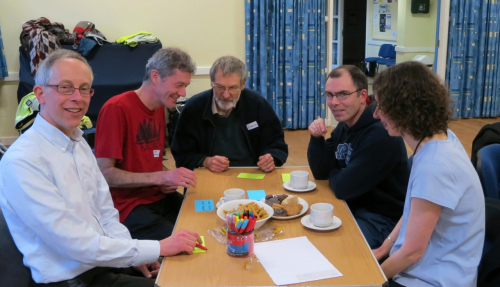 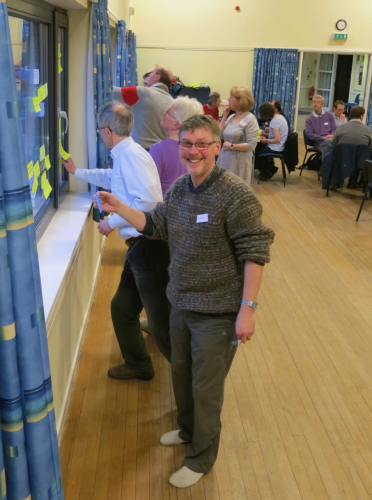 Keith adds his idea to the Gallery. (credit: Sarah McConachie)

Then we worked to group and categorise the ideas. Everyone joined in at the windows, sorting, moving and collating Post-it Notes until we had them in neat labelled groups in common themes. This process goes round in circles for a bit as people discuss whether 'buy new saucepans' fits into the 'New Tools' category or goes into a new 'Catering Equipment' category along with 'repair kettle', but the main principle is that the person whose idea it was is consulted and gets the final say about what happens to their idea. After 30 minutes' work we had grouped the Notes into a dozen or so categories that everyone was content with. All the ideas were still up on the windows, and everyone had a chance to comment on the groupings and categories. At this point we were still bang on schedule. 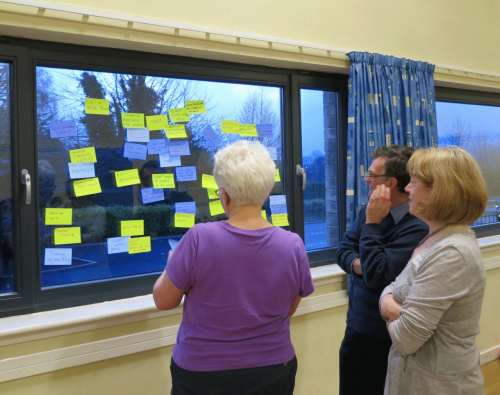 Then we weren't. The next step in the process was to pick the top six categories from the dozen or so in front of us. I had a plan for this that has worked in the past, but there was a delay while we discussed and agreed alternative approaches. I updated the timings on the agenda, warned Sarah to stop cooking the rice, and moved to the voting process. We asked each person to vote for as many of the options as they wanted to progress. The ones with the most votes went on to the next stage.

When the voting was over we'd identified six suggestions to develop further. People divided themselves into six teams based on which suggestion they were most interested in, and went to prepare presentations. With all the Post-it Notes in front of them, the teams set to work on a short talk, supported by a couple of flip chart pages, about the advantages, disadvantages, risks and benefits of spending Colin's legacy on the suggestion they had adopted. The hall went quiet again: above the murmur of discussion and the flapping flip chart paper we could hear the sound of the cooks stirring vats of steaming rice.

After 20 minutes of preparation, we started on the presentations. We kept these to less than five minutes, and each was followed by questions from the floor. The questions weren't answered at the time, but were a way of capturing comments and improvements from everyone present to make sure that each proposal was the best it could be. At the end of the presentations we had a set of flip chart notes and questions from the floor for each team.

Then there was final round of voting. Having heard the presentations, and seen the suggestions from everyone present, I asked for a show of hands in favour of each of the final six topics. People could vote for more than one suggestion, so this gave a pretty clear view of what the 30 or so people in the hall thought was important. The results were:

And then it was time to stop talking and to eat! It was a bit later than expected at the start, and I'm grateful to the cooks for coping so calmly with my ever-expanding schedule. 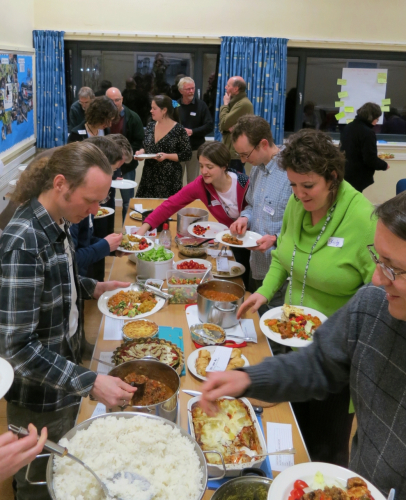 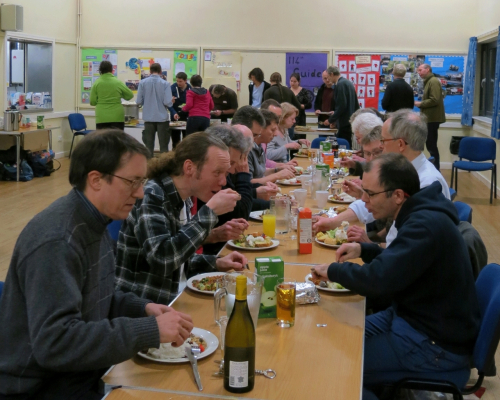 Everyone tucks in after a hard afternoon's work. (credit: Sarah McConachie)

The process generated hundreds of ideas. We narrowed those down to a dozen or so topic areas, and then picked our top six from there. The six had more detailed review and scrutiny to present a prioritised list for the Trustees to consider. This was a robust and rigorous process. For example, the suggestion to buy land was one that seemed a good idea to start with, but during the process of detailed scrutiny it was discarded because the risks and costs outweighed the benefits.

I enjoyed the challenge of running the session, although I was strangely tired the next day. I hope that everyone who took part found it fun and engaging and that they felt their voice was heard and their contribution valued. I'd like to thank the Legacy Event team (Sarah, Nicola, Rachael and Louisa) for letting me do it my way, for buying great stationery and for organising such a brilliant event. [And thanks to David Monaghan for running such a complicated event so calmly and skilfully. - The Legacy Event team.]