Not being a car owner or driver, one of my favourite aspects of LCV is going to places I couldn't easily access or simply don't know about. So thanks go to Greg Milne for guiding us along the cycle paths and quiet roads of East Lothian on a lovely cycle ride to Ormiston for the recent LCV social trip.

Our destination was the famed Ormiston Yew, a truly magnificent specimen. It wasn't a small pretender but a massive grandfather which stretched and layered wider than a house. Its impressive trunk threw out large, sprawling branches which drooped into the ground and resurfaced nearby, forming tall trees which reached towards the sky. The bark was red in places, and small green leaves adorned the branches giving it an "old-yet-young" appearance.

Wandering beneath the tree called to mind spooky, Blair Witch-style pagan rituals. We tried to imagine how many people might have hidden or sheltered beneath its crown over the course of its 1,000 years.

You'll be pleased to know that we even managed to do a bit of conserving on the return journey, by sawing back a conifer which was overhanging the cycle path courtesy of Mark's Swiss army knife!

Thanks to Sarah for organising this fun outing. Dreadful pun in the title courtesy of Keith Knight 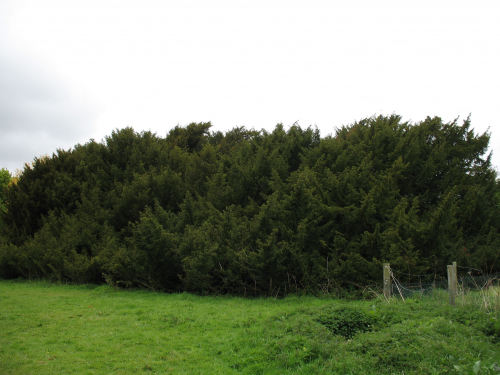 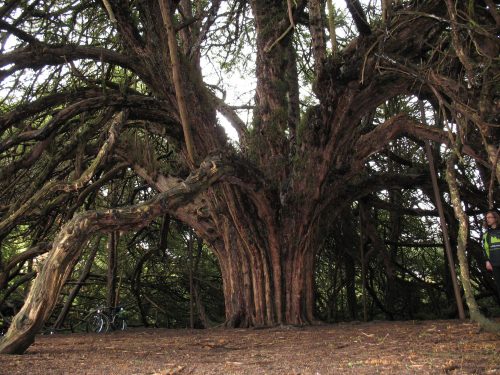 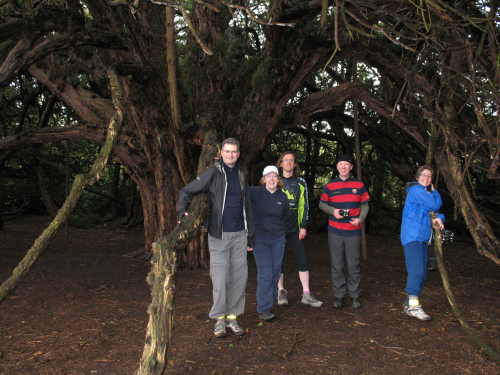 Inside the Yew (with interlopers)